An Incident At The Border - Review 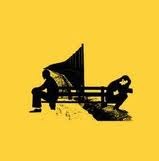 An Incident At The Border is a play whose whole is unfortunately less than the sum of its parts. Kieran Lynn’s piece sets out to comment on power, bureaucracy, the impotence of the individual vs the state and the dynamics between man and woman. A tall order for any piece of theatre and far too broad a canvas for an 80 minute one-act play.

The play opens with lovers Olivia and Arthur enjoying an afternoon in the park. The location is not specified, however recent significant political upheaval is alluded to. After defining the affection between these two, Lynn has a Ruritanical border guard, Reiver, literally pop up from behind a bush with a roll of duct tape, to demark a new national border that incongruously bisects a park bench and which of course separates the two lovers.

Marc Pickering as Reiver, delivers the most engaging performance from the cast of three. A barely trained armed guard, equipped with Taser and walkie-talkie, he plays a convincing inadequate, who enjoys the status that a uniform and a weapon bestow upon him, a status that he appears incapable of commanding in his own right. His performance chillingly shows how power can corrupt, how he believes his uniform and rank will make up for his sexual inadequacies and how, when his Taser is taken from him, he cowers with pathetic fear, scared of his superiors as well as of being stunned by the device.

Florence Hall and Tom Bennett are the lovers drawn into this impossible situation. Hall’s Olivia is an impetuous performance that at times shows perception, but all too often is reduced to shouted indignation as she rails against both Reiver’s ridiculous rules and her perception of Arthur’s apparent failures. Bennett’s character as her foil, is barely given an opportunity to move out of second gear and when he does, towards the end of the play, his military persona lacks credibility.

The playtext helpfully served as the evening’s programme. A brief study of this book reveals that the play’s ending as performed, differs quite fundamentally from the play’s ending as printed, both in word and action. This does not inspire the confidence of the audience in the writer’s ability to express his vision.

Whilst the three actors work hard, they are not helped by a script that should have been tighter and at least 30 minutes shorter nor by Guthrie’s direction that fails to effectively exploit inter-personal conflict.

This review was first published on The Public Reviews website.