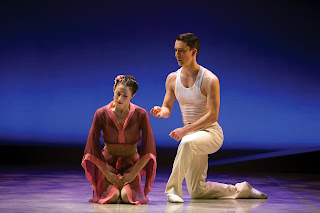 Visiting Bromley for the first time and for two nights only, the Northern Ballet - Europe’s Best Dance Company as recognised by the Taglioni European Ballet Awards - offered a thrilling programme of imaginative dance.

Opening with Perpetuum Mobile, a short work choreographed by Christopher Hampson. Set to Bach’s Violin Concerto in E Major, the performance mirrored the increasingly complex layers of music found within the composition. The dancers’ movements proved continual, fluid and dynamic with Lucia Solari, Ayami Miyata and Javier Torres in particular offering captivating performances. Created over 15 years ago, Hampson says he was “initially inspired by the score.” This was evident and it is the close marriage between movement and music that made Perpetuum Mobile a joyous contemporary piece to watch.

After a short pause the company's Madam Butterfly commenced, with the stark contrast between the beautiful, flowing costumes of traditional Japanese culture and the streamlined costumes of the preceding piece immediately obvious. As the audience shifts into the world of Madam Butterfly and gradually in love with the young geisha Butterfly, – danced by Pippa Moore – the story moves at pace.

We are introduced to Goro, the marriage broker and Pinkerton, the American naval officer that steals and keeps Butterfly’s heart. The marriage scene is breathtaking; wedding guests in kimonos, in an array of colours, floating around the stage all the while twirling oil-paper umbrellas.

We empathise with Butterfly's falling victim to circumstance, with Moore convincingly portraying her complex character. Butterfly displays love, for her maid Suzuki and her young son – and an undying love for Pinkerton. She also demonstrates strength – surviving the wrath of Bonze, the holy man, who condemns her for converting to Christianity – and gumption, for resisting the efforts of Goro who tries to remarry her to a new, wealthy suitor. She knows her worth and values and firmly stands by her self-belief, making her all the more likeable.

The closing scene peculiarly lurches into a contemporary style, set to a recording of a traditional Japanese piece of music. An odd and harsh way to end the performance, yet arguably appropriate for the end of Butterfly’s story.

With the neo-classical Perpetuum Mobile, contrasted with the drama of Madame Butterfly the evening supports the Northern Ballet claim to be “a powerhouse for inventive dance.” Fans of the company will be particularly excited about its version of 1984, scheduled for a world premiere in September.