A Patch Of Fog - Review 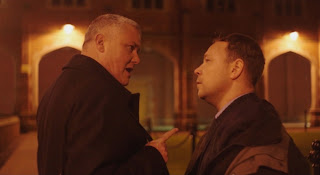 A Patch of Fog from Michael Lennox marks one of the UK’s more intriguing thrillers of recent years.

Conleth Hill is Sandy, a professor and TV personality. He is also a compulsive shoplifter whose life unravels when he’s caught on camera by security guard Robert (Stephen Graham) . A pathological loner, Robert projects a whole unwanted friendship onto the trapped academic as a profoundly unnerving tale evolves.

What makes Lennox’s story so compelling is that both protagonists are flawed and, to different degrees, unsympathetic characters.  The apparently decent Sandy is a thief, (who can't even resist stealing the cigarette lighter belonging to a late-night petrol station cashier), while Robert is evidently disturbed as he sets about his own path of criminality, stalking, blackmailing and threatening the hapless professor. There’s fine work too from Lara Pulver as single mum Lucy and Sandy’s girlfriend, who is also cunningly preyed upon by Robert.

As a psychological thriller it’s a beautifully crafted picture. The script is tight, edgy and suspenseful, with performances to match. Different time, location and style for sure, but there’s a hint of Clint Eastwood’s Play Misty For Me to the tense narrative. A Northern Irish movie, it's a neat touch that sees Gary Lightbody and Johnny McDaid from the province’s acclaimed Snow Patrol score a perfectly pitched soundtrack in accompaniment.

A classy picture, well worth catching.

Now in cinemas and available in VOD online
Posted by Jonathan Baz at 06:52