The Story of Bart - Review

Written and directed by Simon Hanning 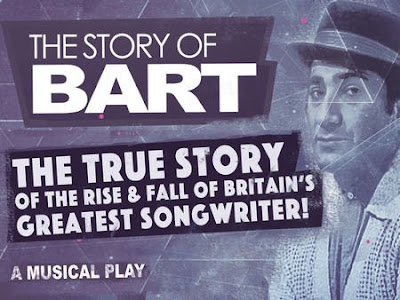 On the hottest weekend of the year so far, it says much for the combined talents of John Barr and the much missed Lionel Bart, that Walthamstow’s quirky Mirth, Marvel and Maud venue was sold out to hear Barr’s take on the man who was to become one of England’s most successful composers of the last century.

Simon Hanning’s debut play is a meticulously researched biopic with Barr assuming the role of the songwriter throughout. The evening’s first half charts Bart’s rise from writing songs for Tommy Steele (Little White Bull anyone?) and Cliff Richard (Living Doll) through to the acclaim of the West End, Broadway and Hollywood that was to come from Oliver!

The script is sprinkled with as many songs as anecdotes – who knew for example that Bart could not write music? He would hum out a tune on his kazoo, while his good friend Eric Roberts (who was to score most of the Carry On movies) transcribed the melodies to written manuscript.

Bart’s compositions were (for the most part) inspired and in Barr, whose stage debut aged 12 had been in Cameron Mackintosh’s 1977 revival of Oliver! and who was himself to meet Bart on several occasions, the casting is as inspired too. Barr’s love for Bart’s work is almost tangible and when he dons one of the evening’s many hats, he truly inhabits the man’s persona.

It’s not just a one-man show however. While Barr is virtually onstage from start to finish relating all the narrative, there is sung support from Oli Reynolds as an impressive Cliff Richard, from Sophie Isaacs whose vocal beauty in copying Barbara Windsor was breathtaking and finally from the always excellent Jodie Jacobs who from time to time pops up either covering Judy Garland’s Maggie May or else as a show-stopping Nancy.

It’s worth noting here that Barbara Windsor who knew Bart well has worked closely with both Barr and Hanning in the show’s development. There is also a further remarkable coincidence - Jodie Jacobs is a cousin of Georgia Brown who in 1960 had created the role of Nancy on the London stage.

The show’s second half profiles Bart’s decline. The fortune that he’d earned from his 60’s success having been squandered on drugs and partying – with perhaps the most heartbreaking revelation being that, in dire straits, Bart sold the rights to his catalogue royalties to Max Bygraves for a paltry £1,000 with Bygraves soon to sell them on for more than a million. Underlining the tragedy, Barr sings a plaintive Who Will Buy? that strips back the Oliver! classic to reveal a previously hidden pathos and reduces the audience to tears. Barr went on to relate that when Cameron Mackintosh re-staged Oliver! at the London Palladium in 1994, he generously cut Bart in for a share of the show's profits, as an act of sheer kindness.

Bart also composed the title song for the Bond movie From Russia With Love. Famously recorded by Matt Monroe, there was a truly magical moment in the evening as Barr played the Monroe recording allowing it to seamlessly fade and segue into Barr himself taking over the number with musical director Noam Galperin picking up the melody.

The production wrapped up with a rousing Oliver! sung-along tribute from the full cast with Galperin’s band, who had been on immaculate form throughout, sending the audience on their way with toes tapping.

There is talk of the show taking a limited tour of the UK. Putting it simply - this has to happen. The gig may still be a little rough at the edges but nothing that can’t be sorted.

In the hands of John Barr, The Story of Bart is nothing short of sensational musical theatre.
Posted by Jonathan Baz at 21:57