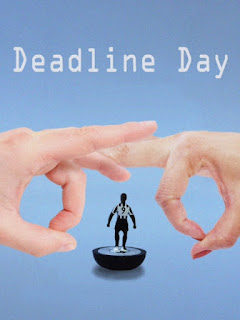 Deadline Day is a delightful spin on the world of football that takes place, intriguingly, in the back of the limo that’s taking (Newcastle) United’s gifted young striker Danny south to sign for Chelsea. To the un-initiated (and if you need this explained then the play is quite possible not for you) deadline day marks the end of the twice-yearly transfer windows, during which football clubs buy and sell players. Frenetically fevered, deadline days traditionally generate extensive news coverage, along with wonderfully fanciful rumours that can clog the channels of both mainstream and social media. The day typically fuels debate and discussion across the land as deals are closed.


Hickman and Robertson’s writing is, for the most part, well observed. Through the eyes of Danny, his agent Rachel and their driver Trevor, many of the issues that surround the modern day game are touched upon. Aside from frequent jibes aimed at Mike Ashley (United’s real-life owner), the play references the obscene salaries paid to footballers contrasting them with the humble earnings of the hard-working stadium filling fans for whom supporting their club is a way of life. And while Deadline Day manages a deft nod in the direction of gender politics it also remains refreshingly free of those cumbersome issues of sexuality that have so often dogged football-themed plays of recent years. This is a play written by fans, for fans.

A climactic event half way through the narrative, albeit helpfully allowing the script's arguments to be aired, stretches the plot’s plausibility perhaps just a little too thin - but throughout, it is the assured performances of Victoria Gibson’s Rachel and Mike Yeaman’s Trevor that hit the back of the net and which make the play eminently watchable.

Gibson comes from fine footballing stock - an understanding of the game is in her blood - and she puts in a canny turn as the feisty dealmaker. Tradition has long seen football be treated as a both a man’s game and a man’s world. Gibson is on top form as she throws into vivid relief the challenges women face, trying to assail the beautiful game’s chauvinist enclave.

Yeaman brings a wise, lugubrious interpretation to a man who’s supported United for nigh on 50 years. Ultimately a caring loving man, committed to both his club and his family, Yeaman’s definition of a man struggling to comprehend the evolution of women in the game, is a well crafted performance. Completing the trio, Tevye Mattheson puts in a well meaning if sometimes stilted shift as Danny - capturing the bewildering whirl of the day from the player’s perspective.

For anyone who loves football, this is a fun night at the theatre - and with the play lasting barely an hour it's an early bath for everyone too. Recommended.

Runs until 16th September
Posted by Jonathan Baz at 07:10