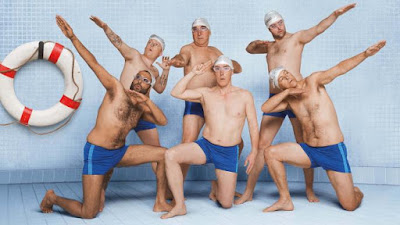 In what must surely be the feel-good movie of the summer, Swimming With Men mixes up a quirky storywith a sprinkling of fairy-tale fantasy, but bases its charm on a rock solid core of friendship and camaraderie.

Rob Brydon is Eric is a disillusioned 40-something accountant, convinced that his newly elected Councillor wife Heather (great supporting work from Jane Horrocks) is cheating on him, and struggling to communicate with his teenage son. Eric’s escape is to the local swimming pool where quite by chance he stumbles across a suburban, aquatic and quintessentially British take on Fight Club (to use a cinematic analogy). Half a dozen men from a range of ages and backgrounds meet once a week as an amateur synchronised swimming group - and it all goes swimmingly from there

The storyline may be delightfully improbable - but what slices through this movie’s choppy waves of incredulity are the back-stories that the six pals bring to the pool. There’s Tom played by the young Thomas Turgoose, a chancer who’s forever dodging the local cops, Rupert Graves is is the once-suave Luke, now divorced and missing his daughters, while the venerable and always excellent Jim Carter is Ted, the elder statesman of the group and perhaps the wisest too. Each man has his own personal tragedy that for one blissful hour each week, is left in the changing room with their clothes.

When Susan (Charlotte Riley), a swimming instructor at the pool engineers an encounter with a member of the Swedish Men’s Synchronised Swimming team, the plucky Brits are spurred on, trained by Susan, to enter the international amateur synchro-swimming finals in Milan. The story’s ability to upend common sense is matched only by its all consuming charm, sensational acting, and ingenious photography. And in a world thats increasingly dominated by CGI and special effects, see this movie if only to marvel at Jim Carter, aged nigh on 70, performing real underwater loops in the synchro-swimming routines!

With a gorgeous score from Charlie Mole that occasionally doffs its (swimming) cap at Ennio Morricone and David Raedeker’s stunning underwater photography, Swimming With Men is British film-making at its eccentrically beautiful best.

At cinemas across the country
Posted by Jonathan Baz at 08:51