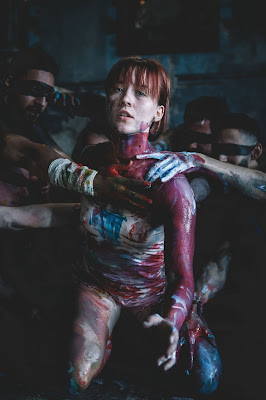 On for a short run at the Turbine Theatre in the last days of pre-lockdown live performance, Identity was a dance show themed around the challenges of mental health. Intriguing and unpredictable – and thus much like the soul of a dancer – the movement was accompanied by a mixture of a pre-recorded soundtrack alongside live music being played too.

This young group of performers achieved their aim of being honest both with themselves and with the audience. Their moves were self-founded, expressive and truthful, with much of the work proving to be both distinctive and excellent. Occasionally the company seemed to lack immersion in the dance, but this will no doubt be addressed over time with experience and tighter performances – when venues are allowed to re-open.

Mental health is a critical aspect of our modern lives, especially with the influence of social media platforms and there was brave imagination from the troupe in seeking to create a safe space, an environment where, as dancers, they could perform and express themselves safely and openly. In a post-show discussion between the audience and the company, the message was clear: that the issue of mental health demands more open discussion.

The performers set out to communicate that people in general should create a more supportive environment for each other, in order to be able to share more readily and to talk more with each other on a daily basis, recognising that everyone has life experiences that are both positive and negative. Their message to young people was ultimately that they should not be afraid to remove those masks that can so easily be used to hide behind - to encourage us all to show our weaknesses and acknowledge that, particularly under the cover of social media, people can appear to be strong whilst in reality that strength is nothing more than a façade.

Throughout, the dancers were able to display their identities along with their personalities as they tried to encourage young adults to follow the same path. Above all, this was an exciting evening of imaginative and moving movement.
Posted by Jonathan Baz at 21:35