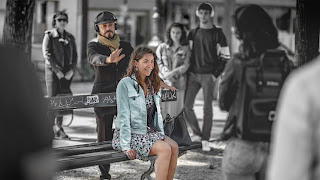 As joggers run by and tourists stop to gander there is something very refreshing about this piece of unconventional theatre that recently premiered in Paris. Sené’s direction is so intricate and versatile however that one suspects the piece could be picked up and played anywhere in the world. And so it should. At a time where the world for the most part has been without theatre for so long, C.O.N.T.A.C.T is an opportunity to reacquaint oneself and make contact with an art form so close to so many, on a whole new level.
Runs until 10th October 2020
Book via www.contactshow.co.uk
Reviewed by Davide Davidssonn
Posted by Jonathan Baz at 18:17