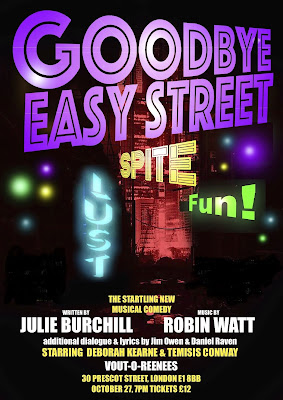 Goodbye Easy Street, Julie Burchill’s new musical, made its debut in the capital at the intimate Vout O Renee’s club on the fringes of the City of London. Burchill’s first iteration of the show, Hard Times On Easy Street had played in Brighton earlier this year. Since then she has taken a sharp pencil to her prose and the result is a slicker, tighter, wittier show.
Featuring a cast of just two, Deborah Kearne and Temisis Conway return as Elle and Anna, two former nightclub singers now the resident turns on a cruise liner. Both in love with each other, the younger bisexual Anna is taking the cruise gig to escape her unrequited love for gay club manager Otto. The worldy-wise Elle has a far more sanguine view of the world. Together however, the pair’s relationship is passionate, credible and fuelled by sharply-tongued banter
In stripping her original show down to the two women only, Burchill’s scripting scalpel re-arranges her earlier love triangle into a far more plausible parallelogram. The interval has been ditched too with the whole piece coming in at just under the hour. Best of all, away from the original over-complicated structure, this simple little love story allows Burchill’s wit to take flight. She’s a gifted writer and her lyrics and dialogue sizzle with sexual frisson and just a hint of political edginess too.
Early on in the show Conway stuns with the numbers Lazy Kind Of Love and Incorrigible You, with Kearne soaring in Speculate To Accumulate. There is a hint of Gershwin in Conway’s There For You, while the pair’s endgame duet of Let’s Be Selfish /Self Care sparkles in its wit and rhythm.
Burchill’s amassed years of premier league writing are on display throughout the piece – her understanding of sex and relationships is blistering, making her points through the most economic use of English. Elle speaks of having had her past love life “fringed by crime tape” – a fabulous metaphor!
Burchill’s Woke-sceptic and staunchly feminist take on the world blaze through this show that demands a bigger audience.
Posted by Jonathan Baz at 14:45