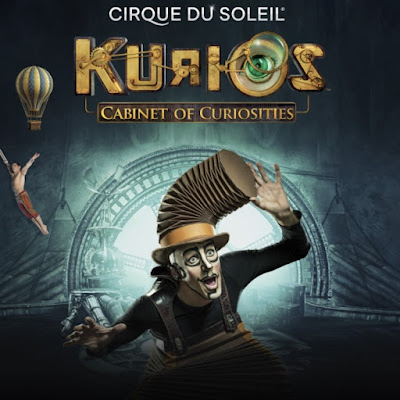 Kurios at the Royal Albert Hall sees the inspirational Cirque du Soleil company make a welcome return to an evening built around the quirks of life, demonstrated through the excellence of human talent. In a show first presented in 2014 there’s no environmental homily or sanctimonious preaching  on offer here. Kurios - The Cabinet of Curiosities is a montage of unashamedly gritty Victoriana.
Strip away the steampunk however and the traditional circus skills on display are breathtaking. The Banquine troupe offer up a jaw- dropping construct of human pyramids the strengths and heights of which are just a joy to behold. Studying the cast list one learns that the troupe all hail from the former Soviet Union, including Russian and Ukrainian athletes. In this show these men are trusting each other with their lives. One can but weep at the beauty that this act represents.
Also from Ukraine, Andrii Bondarenko handbalances his way from the stage to the ceiling - leaving a dinner party down below and encountering a mirror image ensemble suspended upside down from the Royal Albert Hall’s acoustic flying saucers! The act has to be seen to be believed.
Of course there are acts of juggling and contortion that defy our sense of belief with moments of comedy thrown in - almost all through mime - that provide the foundation for a fabulous family show.
Some of the theming may be a tad obscure for the little ones - but they’ll still be stunned by the human wizardry on display here. The ropes and pulleys may be sophisticated and state of the art - but the talent that uses them to soar around the hall’s cavernous interior is traditional human genius at its best.
Runs until 5th March
Posted by Jonathan Baz at 23:40