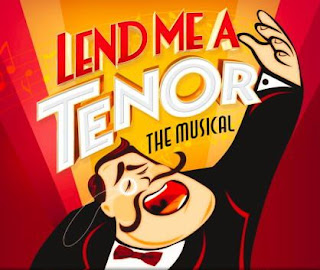 Lend Me A Tenor is a deliciously silly story that makes for a wonderful CD recording. The London premiere of this production was sadly short-lived which did not do justice to the multi-faceted talent that the show presented .

Set in Cleveland, Ohio, the local opera house prepares to welcome celebrated tenor, Tito Merelli, accompanied by wife Maria, to perform Otello. Impresario Henry Saunders is desperate for the opera’s financial survival, his daughter Maggie lusts for Merelli, whilst Saunder’s Jewish shmuck of an assistant, Max, loves Maggie. Add in Saunders’ numerous ex-wives, a local diva with an over-sized ego, and a plot that involves mistaken identities, suspected corpses, bedroom doors opening and closing and trousers around ankles and Peter Sham has assembled all the components of a hilarious traditional farce, set to music.

The essence of good comedy is timing and the comic brilliance of this show lies within a number of perfectly performed duets. Early in the show, with Merelli’s late arrival in town, ‘How Bout Me’ has an eager Max ( Damian Humbley) suggesting to a panicking Saunders that he could step into the star’s shoes. Matthew Kelly shines as the opera promoter who has seen it all. Merelli eventually arrives with wife, Michael Matus and Joanna Riding, and these two stalwarts of musical theatre sing a hilarious number Facciamo L’Amor, in which he professes love for her, whilst she in turn berates him for relentless womanising. The plot thickens, and when Merelli unwittingly finds himself having consumed a powerful sleeping draft and unable to perform,he encourages Max to take his role. Their number, Be You’self is the highlight of act one, as the opera singer coaxes Max’s talents from out of the shy backstage guy. When Humbley unleashes the true power of his voice mid-way through the song, the moment is musically spectacular. Not since Valjean confronted Javert have two men created such stirring passion.

Act two sees Humbley successfully play Otello, and following the performance Sophie-Louise Dann, as diva Diane DiVane, seeks to impress Merelli with May I Have A Moment?, a whirlwind of a performance in which she spectacularly sings a breathtaking pastiche of numerous famous soprano roles and arias.

The CD captures the wit and verve of a wonderful show whilst the liner notes provide a detailed synopsis supported by lavish show photography. This recording offers the opportunity to possess a perfectly captured moment of West End excellence.

Available from Amazon and iTunes and most distributors