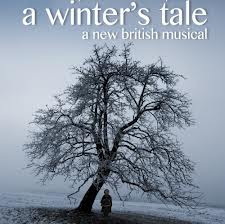 In his programme notes, Howard Goodall says that A Winters Tale is a play that he has long wanted to adapt and it shows. Goodall’s quintessentially English sound resonates throughout the production and the care that he has lavished on composing this work is evident.

Converting a classic into a musical, though, is fraught with peril. Shakespeare’s tale, described variously as a comedy and also as a romance, paints a famous picture not only of misplaced jealousy, deception and anger, but also of hope, forgiveness and love and, with divine intervention, a remarkably happy ending. It’s a story that should lend itself perfectly to a musical theatre treatment. However , whilst Shakespeare’s original lasted in excess of three hours Goodall’s shorter oeuvre has filleted it to the bone, retaining the skeleton of the plot but, particularly in the second act, stretching the book’s credibility almost to breaking point – a risky approach with any fairy tale.

Andrew Keates has nonetheless attracted a cast and creative team of the highest standard to deliver this professional world premiere. Pete Gallagher’s Leontes is imperious in his majesty and his character’s arc, from jealous aggression to broken grieving guilt, is moving and convincing. Helen Power as Ekaterina is a creation of loving honesty and integrity, yet also singing and acting with a purity and beauty that lends a believability to Leontes’ raging jealousy. Alastair Brookshaw as Polixenes, Leontes’ suspected rival, has a more fragile style of fidelity that contrasts well with Gallagher’s initially aggressive machismo.

Fra Fee is a cracking Florizel, whilst Abigail Matthews enchants as Perdita. Her character’s youthful loving innocence had more than a whiff of May Tallentire from Goodall’s The Hired Man, whilst her song The Same Sun Shines, evoked harmonies from that same show’s number No Choir of Angels. Helena Blackman brings an elegant excellence to Paulina, making her a worthy foil to the king’s bombast and bluster and Christopher Blade’s Camillo gives life to a minor part that remains critical to the story. Ciaran Joyce’s comic Rob brings perfectly timed ridicule in the song Sheep and Denis Delahunt’s elderly shepherd Melik is a delightfully wise buffoon.

For a story set in Sicily and central Europe, Goodall eschews Italian influence as well as Bohemian rhapsody . While the story roams across continental borders and oceans, this cast speaks with brogues of broadest Cockney, Irish and Welsh making for A Winter’s Tale that represents a thoroughly modern continent, no matter the medieval costume style.

George Dyer’s four-piece band are perfect, Howard Hudson has again lit the Landor’s space with cunning creativity, and Martin Thomas’ design, particularly the oppressive walls that open and close to denote the different countries, is ingenious. Cressida Carré’s act one choreography again shows what miracles of movement can be delivered in the Landor’s Tardis-like performance space, though at times the act two numbers, particularly at the shearing contest, are less polished.

Like good wine, this show will improve over its run. It’s impressive on the eye, symphonic on the ear and proves that Goodall remains one of Britain’s leading composers.