As Mack and Mabel previews at Chichester Festival Theatre (to be reviewed here next week), I chanced upon a DVD of one of Mack Sennett’s famous two-reelers, Mabel’s Wilful Way, made in 1915.

Not surprisingly the DVD came with no accompanying press release and  nor did the movie itself list any credits. Even so, this short film (13 mins) provides a fascinating glimpse into the Tinseltown of 100 years ago. 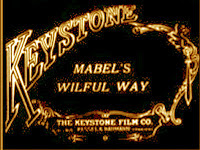 Mabel’s Wilful Way is a two-reeler that unusually was directed by both Mack Sennett and his (and the movie’s) glamorous star, Mabel Normand. Set in an amusement park its mischief defined the comedy of the era.

We first meet Mabel dining with her parents in the park restaurant. Her moustachioed father and celery-eating, domineering mother are formally clad, as is Normand herself. When the chance arises, Mabel slips away from her parents’ stern control and in chapter two of the tale, entitled Short Funded Pals, she meets two young miscreants, one played by Roscoe (Fatty) Arbuckle who are sneaking their way onto the park attractions as they have no cash.

To say too much would spoil the story, but Sennet and Normand set out to entertain as the three young people embark on an afternoon of stolen fun. Ice creams are pilfered, carousels joy ridden and water fountains and food are frequently aimed at hapless individuals' faces. Watch the film and think of Jerry Herman’s Mack singing I Wanna Make the World Laugh and you start to get an understanding of how brilliantly crafted some of Herman’s writing was.

The excellence on screen is of course from the actors and the performances that the director has coaxed from them. By definition there is no sound to a silent movie, so aside from the occasional written captions, all emotion and interaction be it love, comedy, anger or ridicule has to be conveyed through movement and facial expression. And in that regard the performances are genius. There was no "easy way" in those days (a parallel today might be the growth of CGI in cinema, replacing what would previously have required carefully crafted physical photography) and whilst the later Hollywood classics of Sunset Boulevard (1950) and Singin' In The Rain (1952) were to portray two very different sides of fictional silent-era movie stars, both Norma Desmond and Lina Lamont represented an era when a very different set of demands and expectations was placed upon a performer.

Mabel’s Wilful Way includes scenes of Normand and Arbuckle feeding what appears to be a genuine bear and later larking around on a helterskelter, the rotund actor generating considerable momentum on his descent, to maximum comic effect. Their behaviour soon attracts the attention of the LA Police Department, who arrive on the scene administering justice with frequent truncheon blows to the head and body. Let's not forget that in the early 20th century Keystone police brutality was a source of comedy.

Viewed through a modern prism, the movie is troubling. There is one black character in the tale whose role is to put his head through a hole in a board and have soaked sponges thrown at him in much the same way as balls are thrown at a coconut shy. Even worse, (worse?) he is played by a white actor in black slap. 1915 was the Vaudeville era of the racist minstrel show. The civil rights movement was a long way off and in a largely segregated America, the black man was a laughing stock - an aspect of history that Jerry Herman conveniently side-stepped.

Herman’s Mack Sennett sings that Movies Were Movies when he ran the show - albeit a show built on racial prejudice, comical police brutality and an abuse of animal welfare. Since then Hollywood has largely cleaned up its act though as recent tragic events elsewhere in the USA remind us, America still has some way to go.

Time Heals Everything? Let’s hope so……