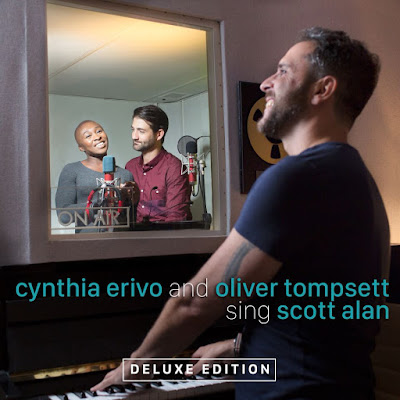 Scott Alan has recently brought out a Deluxe version of the album he released last autumn that featured the paired voices of Cynthia Erivo and Oliver Tompsett. Alan has worked with many of today's musical theatre stars, but with Tompsett and in particular Erivo, there is a muse-like connection between the writer and his performing talent.

So what's new in this Deluxe offering? Aside from the repeated original collection (reviewed here) there are three additional vocal interpretations and charmingly, a full set of "instrumentals only". Of the new stuff, Letting Go Of You is a hallmark Alan ballad, fuelled by experience and voiced by Tompsett who intuitively lends an almost autobiographical voice-over to the number, telling Alan's life through his song.

Erivo adds another solo effort with the profoundly inspirational Don't Give Up - again drawn from the depths of a depressive trough but still, sweetly and amidst the desperation, offering a message of essential hope.

The most revealing addition to the album is the duetting given to Anything Worth Holding Onto, a song long defined by Erivo's interpretation. Here however, with Tompsett delivering those familiar opening lyrics, hearing this scorching number sung by a man place's the song squarely back in Alan's personal domain, opening up another perspective into both the song's singer and its writer. When Erivo accompanies Tompsett she sings in the manner of the song's master (or rather, perhaps, its mistress) stepping back and letting her fellow actor (or in this particular number, maybe even her apprentice) explore the depths of the song's reach.

Perhaps the most charming aspect of the Deluxe version is simply the opportunity to sit back and re-appreciate At All, the song Alan wrote for Erivo in anticipation of her crossing the Atlantic to open in The Color Purple on Broadway. Well the show’s opened now - and the song that so presciently talked about the fame and acclaim that awaited her has been proved correct. As we sit in England and ponder that we might just have lost this Londoner forever, the song takes on a deeper poignancy knowing that Erivo is arrived on Broadway, her star billing more than deserved with the deluge of five-star reviews garnered by the show.

The instrumental tracks are a gift for musical theatre performers, students and fans alike. Alan's songs are popular choices in modern balladry and these recordings open up his work to interpretation, exploration (and quite possibly, dare I say it, well-meaning decimation too) to those who admire his work.

If you love the genre and admire Alan's writing, this Deluxe album will only enhance your collection.


The album is available via the usual channels on Amazon and iTunes.
Posted by Jonathan Baz at 22:29