A Song Goes Round The World - Review 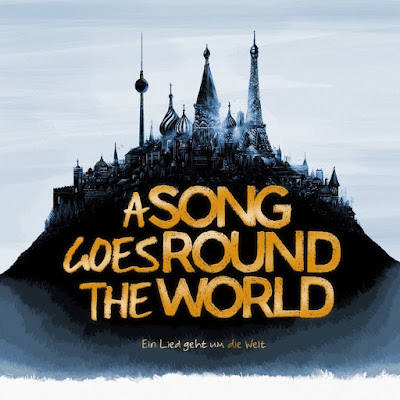 For one night only, Daniel Donskoy with Inga Davis-Rutter created an evocative evening of cabaret, which if not quite as global as the title suggests, offered a bouillabaisse (or should that be tzimmes?) of Continental songs from the 1930s that spoke of humour, love and culture as well as Europe’s more troubled times.

Only in his mid-20s Donskoy truly is a child of Europe. He’s grown up in several countries and boasts a multi-lingual magnetism that is as attractive as his voice is smooth. The first half sees him commanding the stage and whirling the audience through some of the bitter-sweet gems of the German and Yiddish songbooks. If a number of the songs will not have been familiar to the audience - it didn't really matter. Donskoy offered a warm and informative patter that seamlessly linked the numbers. His take on A Yiddishe Mame hit the sweetest of spots with his audience, while Bei Mir Bistu Shein that was to prove a multi-million dollar smash hit for the Andrews Sisters, was here stripped back to its origins. Donskoy’s Papirossen however, a lament from the Polish ghettos, marked a brief yet appropriate reference to the hellish devastation that the last century wreaked upon European Jewry.

As the silver tongued Donskoy danced through the linguistics, I was reminded of Joel Grey's chameleon-esque Emcee in Bob Fosse's movie Cabaret, singing Wilkommen in its three different languages. No sinister undertones here mind, nor of course the sleaze of pre-war Berlin in the dapper St James’, but rather an outstanding mastery of multi-lingual nuance that is not often heard.

The show dropped a gear after the break. Jackie Marks came on to sing La Vie En Rose. Sung well, Piaf’s songs can reduce grown men to tears. Notwithstanding Marks' all powerful belt and presence, her take on the number's English translation (which itself lacks so much of the French original's je ne sais quoi) made it all seem just a tad more Dorien than Diva. Donskoy then sang Piaf's Hymne À L'amour, a tall order for even an accomplished male singer and didn't quite hit the mark. As the gig evolves, its French Quarter needs work.

But this was an evening of musical diadems and fascinating facts. Who knew that Mary Hopkins' Those Were The Days had stolen its melody from the Russian folk song Dorogoi Dlinnoyu?

Davis-Rutter was a delight on the keys. Accompanied by bass and drums (perhaps a clarinet too, next time?) she partnered Donskoy and Marks perfectly, giving a spectacularly Spanish infused piano solo just before the interval.

With the intimate Studio packed for the gig, Donskoy and Davis-Rutter make a fabulous team. A Song Goes Round The World is an imaginative addition to London's cabaret scene and is well worth catching on its return.
Posted by Jonathan Baz at 20:09