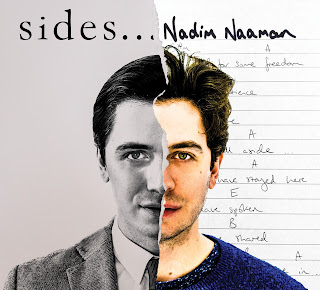 Sides is Nadim Naaman's second album and it is a pleasure to catch up with this talented young man's vocal interpretations of some of Disney's and the West End's greats along with a selection of his own compositions. Naaman has also invited a number of musical theatre's contemporary leading lights to accompany him, making the album a refreshing selection of voices.

The songs are split half and half between Naaman's own writing and his covers. His own works are easy on the ear and beautifully sung even if I'd have much rather heard Jeremy Secomb duet with Naaman in a song from their pop-up pie shop Sweeney Todd that I missed in the West End. But, with a couple of exceptions, the original stuff is a bit too much of an introspective ballad-fest to truly inspire. There is however some fabulous acoustic guitar work throughout the album (of which more below) and Naaman's This'll Be The Year, has a rhythm that almost suggests a hint of Dire Straits. The song-writing is at its best in Marry Me, which seems to bear an unbridled autobiographical energy bursting from the stanzas. It is a real pleasure to listen to this uninhibited celebration of love.

Naaman is at his finest however in covering the songs written by the industry’s greats. Having played in the Southerland/Tarento production of Maury Yeston’s Titanic on both sides of the Atlantic, it’s a nice touch that sees him share the singing honours of the show’s The Proposal/The Night Was Alive with Rob Houchen who has replaced him in this summer’s Titanic revival of the show.

A great modern creative collaboration has been that of Stephen Schwartz and Alan Menken. Naaman’s take on their Out There from their The Hunchback Of Notre Dame is terrific. If this recording is Naaman laying down a marker to be considered for a West End run of the show, it’s a classy calling card. He swoops and soars through the song’s beautifully descriptive narrative, giving every suggestion that he’d make a top-notch Quasimodo.

The biggest treat however lies in Naaman’s beautiful arrangement of the title song from The Phantom Of The Opera, the show in which he currently plays Raoul. Accompanied by Celinde Schoenmaker (his current Christine) Naaman gives the number a flamenco interpretation – replacing Lloyd Webber's gothic organ riffs with guitar and, sensationally, trumpet. Of course this version can never be for the punters at Her Majesty’s Theatre – however as a re-worked interpretation of an iconic song, I’d venture to suggest it is unsurpassed. More of this please.

Sides shows a very different side to this most gifted of Gooners and is well worth the download!
Posted by Jonathan Baz at 22:51