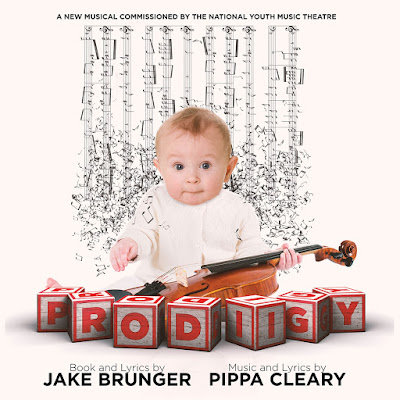 The CD of the Prodigy Original Cast Recording is just released and it’s a pleasure to re-visit the show that premiered last year in London as the National Youth Music Theatre's summer offering.

Set around a reality TV show that seeks to discover a child prodigy, Brunger and Cleary's show offers an entertaining glimpse into some of the passions and superficialities of modern life, in which the competitive desire for fame and attention can be all consuming.

Listening to a CD offers a greater opportunity to consider a show’s songs in more detail. Reality TV is fertile ground for writers. A couple of years ago I Can't Sing! Had a short-lived outing at the London Palladium, lampooning The X-Factor. To be fair Pippa Cleary's compositions stand up well in comparison to Simon Cowell's multi-million pound extravaganza, but where Prodigy falls a little flat is in the wit of its libretto. Brunger and Cleary are clearly a talented pair but a sharper bite to their lyrics wouldn't go amiss.

The CD also demonstrates quite how magnificent the female voices were in the NYMT class of 2016. Sephora Parish is a knockout in Block Out The Noise, Laura Barnard's Good TV brings an effusive energy, whilst the wryly perceptive Mother's Shoes duet from Emma Ernest and Caroline Whittingham offers sage observations on what really matters in life, in a song that is impressively free of cliché. There is some comic genius in the show with the younger siblings’ double act, We've Got Talent Too, proving as infectiously wonderful recorded as it was live on stage. Bravo to Hannah Irvine and Luke Rozanski for giving the number the comedic chutzpah that ranks it alongside Kander and Ebb's Mr Cellophane from Chicago.

Well engineered, the recording is a credit to NYMT’s instrumentalists and especially Musical Director Candida Caldicot with the show’s band delivering an exquisitely professional sound. This is a CD that is well worth adding to one’s collection.