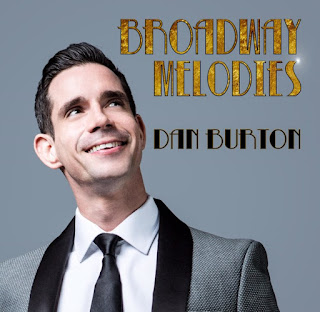 It is a delight to review Dan Burton’s debut album Broadway Melodies. As choreographer Stephen Mear has long known, Burton is currently amongst the finest of musical theatre “triple threats” (defined as talented in all three skills of song, dance and acting) and a man who unassumingly provides an assured touch of class to all his roles, whether they be leading or support. Recent years alone having seen him give an assured Tulsa alongside Imelda Staunton’s Momma Rose in Gypsy, an immaculate Billy Lawlor in a Parisian 42nd Street, with Burton only recently having closed a flawless (and sold out) run as Jerry Travers in Top Hat at Kilworth House.

Those three shows on their own define Burton’s affinity with and affection for the classics from The Great White Way, so there is a true sense of belonging in listening to the singer’s choices – a selection that also bears a distinctly autobiographical touch too.

Burton opens the album with Singin’ In The Rain (he’d played Don Lockwood at Paris’ Chatelet a couple of years ago and keen fans may care to visit Paris this December where the show is soon to return) and gives the timeless number a warmly respectful treatment that drips with the comfort he feels in the role. The song is one that’s known by literally everyone and yet Burton still imbues it with a loving freshness - and there’s a cracking trumpet riff too from Gethin Liddington.

Chichester’s production of The Pajama Game from a few years back transferred, with Burton, to the West End and so it is little surprise that the show’s Hey There features among Burton's chosen ten songs, with his gorgeously mellifluous interpretation makes this number arguably the album’s highlight. Scaling Richard Adler’s and Jerry Ross’s intoxicating key changes with a charm and a confidence, Burton makes one want to set the track to ‘repeat’, to fully savour an enchanting three minutes of song.

There’s a delightful note of comedy as Burton teams up with Lee Mead for Well, Did You Evah. Crosby and Sinatra will always be a tough act to follow but there’s well-rehearsed nuance in this recording and one still cannot help but chuckle at Burton and Mead’s take on the tried and trusted gags.

The entire collection is a treat, with amongst the other songs included are a fabulously sonorous I Only Have Eyes For You and a perfectly pitched I’m In The Mood For Love.

Sensitively produced by Mason Neely, Broadway Melodies is a must for anyone who loves exquisitely sung show tunes. The album is but a gorgeous glimpse of Dan Burton’s talent and with Xmas just around the corner, could well make a perfect gift.

Available to download from Amazon and iTunes
Posted by Jonathan Baz at 18:16