West End Producer - The Man Behind The Mask 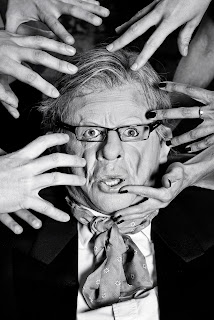 Well, London's theatre scene has a similar riddle. For the best part of six years, no press night has been complete without the masked, mysterious and above all, enigmatic presence of the capital’s West End Producer.

With a media persona that emerged on Twitter and has since taken him to become one of the most popular contributors to the industry’s weekly organ The Stage, WEP (as he is known) has become one of the “go to” commentators on the UK's theatre scene.

The masquerading pundit is fast becoming a prolific author too, with his second volume on the theatre world Everything You Always Wanted To Know About Going To The Theatre But Were Afraid To Ask, published this week.

Amidst a study strewn with bottles of vintage Dom Perignon, I caught up with West End Producer this week, to learn a little more about the man behind the mask…..

JB:    Here we are to discuss Everything You Always Wanted To Know About Going To The Theatre* (*But Were Too Sloshed To Ask). This is your second book, how many more do you anticipate writing?

I think one more would be quite nice, a trio, wouldn't it, on the book shelf? But I don't know what the next one will be. It's about finding the subjects that are relevant and interesting, and of course, not repeating the same subjects but looking at theatre in a light, fun, yet supportive way.

JB:    I'm curious about your writing process. Before the book goes to print, how much of your original draft is ripped out by the libel lawyers?

WEP:      Well actually quite a lot my dear and may I say, what an excellent and very well thought out question!

What I do, I will have a first draft. Well to begin with, I will send about 10,000 words in to my editor, to Nick Hern Books, who will have a little read, and see if he thinks it's the right direction for them.

But of course I don't want to get in trouble. It has to be based on fact. It can't be too naughty because even though I prod, and tease, and tickle (and slightly whip) some people involved in the industry, it's all done from a place of admiration, you see.

JB:    Along with many of your readers, I like to think of your writing as tongue in cheek.

It’s salacious gossip I know, but that's how one gets a career these days. So, WEP's tongue has been in many cheeks, my dear.

JB:    Is that gossip salacious or, perhaps, fellatious?

JB:    You spoke earlier of the Harry Potter approach; of writing a string of titles. We know that J.K. Rowling’s inspiration came to her at a time when she was down on her luck, and she sketched out her anthology in an Edinburgh coffee shop. Where did your inspiration come from, to be an author, all those many years ago?

WEP:      I suppose I’d done bits and bobs of writing as “me” anyway not as WEP, but actually I suppose that Twitter is a platform which is actually rather good for writing and writers. It helps writers to get rid of rubbish, the shitty things, because you have to keep it so concise, you see. I think Twitter, as a tool in the craft of writing, is actually quite valid.

JB:    It must have been quite a challenge, leaping from 140 character tweets to 10,000 word manuscripts. How did you manage to bridge that gulf?

WEP:      To begin with, someone mentioned it to me, and said, "Maybe you should write a book because what you write is quite funny." So I just sat around and gave myself the target, when writing the first book, of writing 500 words a day, and I did that.

I wanted to make sure that it still had the zing, and the power of a quick Tweet, which is why I try and make it quite funny and quite quick in the way it deals with things, but actually, I must say, the first book, it did just all come out of me quite quickly. Stuff doesn’t always come out of me quickly, but the books did.

I found the whole thing quite cathartic, quite therapeutic, writing these thoughts I had, writing these stories of things I'd heard. It just all came out, and I enjoyed doing it. That's the thing. You have to enjoy the writing.

If it's a chore, then first of all, what you're writing won't be very good I don't think and secondly, you'll start resenting the time that you put into it.

I find, if I'm honest with you, I have to write fairly late in the evening in my study. I sit here with either my Dom Perignon, or a lovely G&T, and I sit here and write with my musicals playing on my speakers.

I’ll have the lights rather dimly lit, alone apart from my Jean Valjean teddy who's staring over at me with his enthusiastic eyes, yearning, inspiring me to write. And of course occasionally, my Miss Saigon blow-up doll will whip me when I start getting distracted. That's my writing ritual.

JB:    The West End already has one world-famous musical about a man who hides behind a mask. Do you think there's room for a second?

WEP:      Oh, yes, my dear. Yes, indeed. I have to be honest with you, I have thought about it, talking to some people about doing a little show myself, more of a talk-thing, in the theatre, variety-thing, interviewing actors and the West End Wendies about their time in the theatre, and talking about my life a little because it is quite silly really that I'm a mask-faced impresario.

It's a slightly shocking, concerning thing that I do, but it's quite fun. It allows me to say things and write things and meet people like yourself.

JB:   And when the time for that musical arrives, who would you like to be cast in the role of playing yourself?

I think Hugh Jackman might do a good job because he looks quite similar to me in real life, you'll see. I think if we go on that, I think we'll give Hugh a call. If he says no, just in terms of ticket sales, we'll see if Cliff Richard’s available because at least we know he'll fill the theatre with lots of purple rinse old dears. As a producer, one always must think about bums on seats.

And who knows? Maybe we can get dear █████ █████ to play my mask. I'll see if she's up for it.

JB:    Changing tack. The book must have been going to print just as the terrible revelations of sexual exploitation began to dominate the news.

Your chapters offer sound suggestions to fans at the stage door, including the prescient advice: not to touch actors without their permission.

On a far more serious note, to what extent would you offer a cautionary word to your fellow industry professionals to behave similarly?

WEP:      I think my cautionary word to other producers, and everyone in the industry is that it is about respect and about knowing the boundaries. It's about treating people as you wish, and would want to be treated yourself. Not only just that, but knowing that some people are more sensitive than you possibly are. No one person is the same. So one person may feel different about a little kiss on the cheek, an overlong hug, or something. You have to be very perceptive and judge the situation accordingly.

I think it's our duty to, particularly now, be more caring, more aware, more self-aware. That doesn't mean that one can't flirt, and one can't have fun because the worry is that flirting and fun will disappear. No, it won't. It will be done slightly differently, I think, more respectfully. You will be more aware of where the boundaries are and I think people will just start questioning themselves, and what they do, and what they say before they do it. That can only be a good thing.

JB:    Turning back to yourself, I note from your biography in the book that you were born during a particularly bloody production of Titus Andronicus.

WEP:      Yes, my dear, oh, dear me. The production photos of that show, I tell you, adorn my study rather disgustingly. It's a bloody show anyway, but it was particularly bloody that night!  I was literally born onstage, so really I had nowhere else to go to, no escape, my dear. Theatre was literally thrust upon me. As many people do in theatre, they thrust in a theatre, and I was thrust upon it. I haven't managed to escape since.

I'm thrilled that I haven't because I’m surrounded by wonderful people, silly anecdotes, ridiculously, fantastically talented human beings, and a wonderful community who do look after each other.

JB:    The book is sprinkled with references to some of the great musicals. Do you see it becoming referred to as an anthology, a reference book that people can turn to?

JB:    And as you’ve stated in your Twitter profile, "Plays are too long."

WEP:      Yes, sadly they do go on. The good thing with musicals is if there's too much bloody talking, get the conductor to move his little rod around, get the musicians to start playing, and suddenly we're whisked away, energy is on the stage again, and jazz hands wake us all up.

In a play, sadly, people sometimes go on talking, which is fine if the play is at least interesting.

Also, when we can't even hear what the bloody actors are saying, it becomes a thankless task, doesn't it?

Quite frankly, I'd prefer to be at home with my Miss Saigon blow-up doll sharing some intimate dance moves.

JB:    This has been a fascinating interview. Thank you so much for your time and I wish you every success with the book launch!

WEP:      Thank you too and let me say, well done to you, Jonathan. I love how involved you are and the amount of reviews you do, I think it's wonderful. They're great and you write so well, and it's lovely that I've known you for quite some time now.

WEP:    So bless you, my dear. Enjoy, and please read the book again. I look forward to reading our little interview when it’s published. Have a wonderful Christmas, and if I see you about, we'll have a mulled wine.

For the perfect Xmas gift you can buy a copy of  Everything You Always Wanted To Know About Going To The Theatre* (*But Were Too Sloshed To Ask) here: 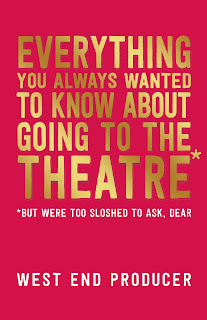 Email ThisBlogThis!Share to TwitterShare to FacebookShare to Pinterest
Labels: Everything You Always Wanted To Know About Going To The Theatre* (*But Were Too Sloshed To Ask), Features, Nick Hern Books, West End Producer, West End Producer - The Man Behind The Mask, Xmas 2017