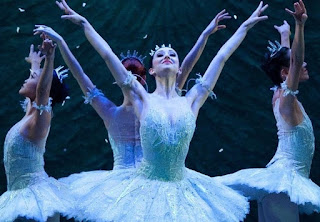 One of the best-loved ballets, Nutcracker returns to London’s Coliseum and is a real festive treat from start to finish.

Wayne Eagling’s lavish production for the English National Ballet, which premiered in 2010, is set on Christmas Eve. A young Clara is enjoying her parents’ Christmas party, where she is gifted a Nutcracker doll by her godfather Drosselmeyer, toymaker and magician, and shares a dance with his nephew. Later that night she dreams of an enchanted world with Nutcracker, who becomes Drosselmeyer’s nephew, the evil Mouse King and his army, and the Sugar Plum Fairy and her prince.

Tchaikovsky’s score is brought to life by the English National Ballet Philharmonic Orchestra and is paired with fine performances from members of the English National Ballet. Rina Kanehara is graceful and elegant as adult Clara, and shares brilliant chemistry with both Fernando Carratalá Coloma as the Nutcracker and Jeffrey Cirio as Drosselmeyer’s nephew. The Sugar Plum Fairy’s pas de deux with Cirio was one of the show’s highlights. Credit must also go to the young performers from Tring Park School for the Performing Arts, sure to be stars of the future, particularly the young Clara and Freddie, danced by Sophie Carter and Oscar Williams respectively.

This Christmas classic is a feast for the eyes thanks to the spectacular set and a wealth of stunning costumes courtesy of Peter Farmer, including the Sugar Plum Fairy’s beautiful Swarovski-studded tutu. It’s a somewhat dark production at times, with the evil Mouse King making his presence known even in the second act, but there are warm moments tinged with humour, notably during a winter scene complete with snowball fights and ice skating mishaps. It is in the second act that the production really comes into its own, with dances from around the world followed by the Waltz of the Flowers all showcasing the talents of the English National Ballet.

At times it does get confusing with the Nutcracker and Dr Drosselmeyer’s nephew switching back and forth, particularly for younger members of the audience, and a slight niggle is that the hideous Mouse King does outstay his welcome in Act II. That said, Nutcracker is a charming and enchanting production sure to entertain and inspire people of all ages.

There may be three versions of Nutcracker on in London this Christmas, but a standout company of dancers, magnificent score and the lavish surroundings of London’s Coliseum all combine to ensure that this festive treat is not-to-be-missed!

Booking until 29th December
Reviewed by Kirsty Herrington
Posted by Jonathan Baz at 12:43