Come From Away - Review 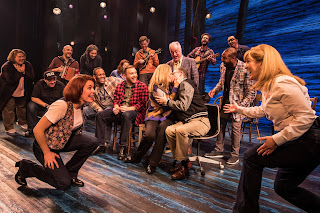 Amidst the horrors of 9/11, there were pockets of human kindness and charity. So it was for the tiny Newfoundland town of Gander who when the United States' airspace was shut down after the four aircraft-based terrorist attacks, found itself having to accommodate 38 unexpected jetloads of passengers, comprising some 6,000+ souls (or “Come From Aways” as the locals call outsiders), for the best part of a week.

Such a flood of humanity was bound to throw up all sorts of issues ripe for a musical theatre treatment – and so it follows in Irene Sankoff’s and David Hein’s composition. Numerous threads emerge, including a love that evolves between two passengers and a neat little tale of a Gander local who realises that there were likely to have been animals travelling in the planes’ cargo holds and rescues as many as she can. Throughout the one-act show (that runs for under two hours) there’s much to warm the cockles of most of the hearts in the audience.

But for all the bitter-sweet vignettes, punches have been pulled. None of the grimmer or more tawdry aspects of what might have unfolded between 6,000 folk thrown together for 6 days (and nights) are explored and while the musical rightly highlights the shameful “othering” that one of the Come From Aways, a Muslim chef was subject to, it offers no comment whatsoever upon the ideology of hate that brought the 9/11 nightmare into being in the first place.

A sung-through piece, the numbers for the most part are tuneful yet forgettable – though that should not detract from the onstage excellence of both cast and band. A truly ensemble show, with no featured actors and all the performers listed alphabetically, standout work comes from Rachel Tucker as an airline pilot and the ever reliable Clive Carter playing all manner of wise and elderly characters. Noteworthy that all of the cast interchange between various roles throughout the evening, doing so convincingly and instantaneously in a flawless set of performances.

Flawless performances however do not necessarily make for a stimulating night. For while Gander’s generosity was unhesitating and generous, one might perhaps have expected the same response from any kind-hearted community around the world. One only has to witness the communal response say, to London’s recent Grenfell Tower tragedy or the outpourings of support that flood in for other disasters, to realise that the Newfoundland folk are not alone in their selflessness. And rallying to support the requirements of (even a few thousand) disoriented travellers, albeit from around the globe, doesn’t quite match up to the heroism say, of New York’s firefighters – many of whom gave the ultimate sacrifice on that most horrendous of days.

Come From Away is unquestionably wonderfully performed, but its schmaltzy set pieces fail to move.