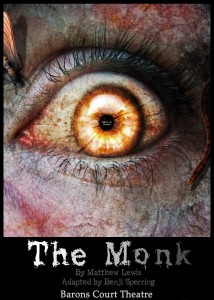 As Hallowe’en fast approaches, The Monk is one of several offerings on the London fringe promising a chilling time. Based on Matthew Lewis’s novel from the late 18th century, it is presented at the Baron’s Court theatre in a new adaptation by Benji Sperring, who also directs.

The monk of the title is Ambrosio, an inspirational abbot from Madrid who becomes tempted by the sins of the flesh and falls from grace, ultimately condemning himself to eternal damnation. Alongside this, the Church’s senior figures of the time are shown to be deceitful and morally bankrupt and Ambrosio’s journey through the play takes place amongst episodes of rape, incest and infanticide. In short, the broadest of horrific canvases to portray.

Sadly this production falls far short of its ambitions. All horror and especially low budget horror, requires acting performances of the highest calibre if the audience is to be truly captivated and frightened. Sperring’s (noble) background is from education and far too often the standards of The Monk resemble a well-meaning sixth form performance, rather than a professional show.

Making his UK debut as Ambrosio is Argentinian Francisco Ortiz. It may be harsh to criticise given that he is acting in a non-native tongue, but whilst Ortiz’s diction is very good, his ability to convey supremely divine and subsequently, demonic, powers of influence through his performance were severely limited. A role as evil as his demands to be performed with a diabolically fiery passion that Ortiz just does not deliver. The fault could well not be entirely his as it is possible that Sperring’s adaptation is at times too simplistic and poorly constructed.

Several of the other performers make their professional debuts. Sadie Tonks plays Matilda a delightfully believable young minx, on an infernally inspired mission to seduce the Abbot. Lucy Dascalopolous, playing Antonia a young girl who is seduced by the Abbot, fares less well though. Her diction frequently tailed off with a lack of crispness to her speech and she is entitled to have received better direction from Sperring. Dascalopolous also has a brief nude scene that troubles within the structure of the play, her bared midriff seemed somewhat gratuitous.

Adding strength to the company were Angela Bull, with several credits to her name in the production, and veteran Judy Tcherniak , who portrayed a convincingly wicked Prioress.

The programme notes that Sperring taught at Eton College and that two of the male debutant actors also attended the school, at which they both obtained extensive acting experience. Whilst that is encouraging to read, for its many virtues Eton does not yet appear to be a vocational drama school. Professional theatre demands professionally trained actors, a paying audience deserve nothing less. Sperring’s endeavours are nonetheless to be encouraged and with some workshopping and rewrites this play could yet become more of a Halloween treat rather than the trick that it currently is.