On general release, certificate 12A 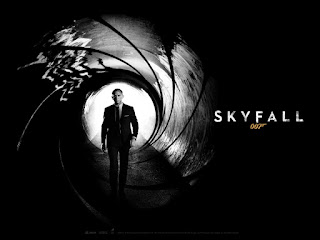 Skyfall is the 23rd film in the James Bond franchise and as has been widely reported, is released to coincide with the 50th anniversary of  Dr No, the first in the series. It’s a dark movie, featuring a Bond who, in the words of director Sam Mendes is a “combination of lassitude, boredom, depression [and] difficulty with what he's chosen to do for a living”.
The acting in Skyfall is outstanding. Whilst Daniel Craig continues to refine and define his interpretation of 007 the film introduces the elite of Britain's performing talent, the likes of Ralph Fiennes, Rory Kinnear, Naomie Harris and Ben Whishaw, to the various echelons of Judi Dench's MI6. Noted theatre critic Mark Shenton tweeted on seeing the film of the legacy owed to British theatre by world cinema. He is not wrong. Shenton further points out that several of these names have already gone so far as to have reached the pinnacle of playing Hamlet within their stage careers. In the current climate of public spending cuts Mendes is clearly leaving this Government department very ably staffed, pending the next Bond instalment. To witness the interaction between these performers, including Javier Bardem as the villain and even a cameo from Albert Finney towards the film’s conclusion, sees the movie mirror the stellar casting that the Harry Potter franchise has consistently attracted over the years.
Whilst the script is biting, witty and sharp, the plot disappoints and to describe the story in even the remotest detail risks spoiling. The evolution of this yarn has had a chequered path as MGM’s finances wobbled during the film’s development and it shows. The plot ultimately evolves into a British based version of Whitney Houston and Kevin Costner's The Bodyguard, an unquestionably well acted but nonetheless unfulfilling narrative.
For the fans, the classic ingredients of Bond are all there. The lines, THAT tune, and an outstanding opening sequence filmed in Turkey are all an absolute delight. Bond’s women are stylish and sexy as well as being thoughtfully fleshed out as characters, though perhaps the film could have cut back on some of the topless nudity. There is only so much of Daniel Craig’s chest that one can bear to watch over the course of two plus hours.  The film also largely plays out in London and the UK and again it is pleasing to see so much of the capital city and the nation's landscapes being exploited by Mendes in this 50th anniversary tribute.
Whilst the photography and the performances shine, some of the action sequences and visual effects disappoint. Relatively early in the movie when a prominent London building is the target for a terrorist explosion, the Bond special effects team fail to deliver a convincing blast. It has also been widely trailed that the film features a tube train crashing. When this moment occurs, the visual effects involved in capturing the destruction of the (clearly model) train carriages are poor. The producers need to bear in mind that modern audiences have sophisticated tastes. They are accustomed to, for example,  both the excellence of the Harry Potter visual effects and also the outstanding work of James Cameron, so when in 2012, the audience is presented with a crashing Underground train that looks as authentic as Spielberg’s shark from the 1970’s, they are entitled to feel cheated. At the risk of being accused of pedantry, a minor point of location credibility also extends to the actual tube trains used. A journey in the movie through Temple tube station on the District Line is being made by a deep “tube” train, rather than the more “rectangular” stock that actually serve that line. The film is of course being marketed at a global audience, many of whom will not have the faintest idea of what carriages run on which London Underground lines. But some of that audience will be Londoners and they will watch those scenes with some part of their suspended disbelief (essential for all story telling) being gradually brought back down to earth. And when filmmakers choose to play fast and loose with even the most basic elements of consistency and respect for location, they insult  their audience's intelligence and it can leave a temporarily unsatisfying taste. On a positive note, Bond's on-foot chase of a villain through the foot tunnels of the tube station is the best such sequence since John Landis' An American Werewolf in London including an impressive and much envied slide down a deep Tube escalator.
The climax of the movie, without revealing anything, is a shoot out between the good guys and the bad guys that relies too heavily on silhouettes machine-gunning each other and lobbing grenades and sticks of dynamite. For this sequence, less would have been more, and again a model of the final building in flames was visually disappointing.
Whilst the opening and closing chapters of this Bond tale are truly striking moments of quality cinema, it is a disappointment that the intervening narrative lacks depth and credibility. Notwithstanding, Mendes and Eon Productions have crafted a worthy and watchable adventure that demands to be savoured on the big screen before it is swallowed up for broadcast on the Sky 007 channel, if only to gasp in amazment at the opening sequence of Bond grappling with a villain on top of a moving train. A classic action movie sequence, captured brilliantly by Mendes and his crew.

James Bond is a very modern icon of very traditional British culture and this film is gloriously British. Mendes however has had his creditable turn at the wheel of this Aston Martin of the movie business. He should park the car and give the keys to Danny Boyle.
Posted by Jonathan Baz at 01:37