Lily Lowe-Myers and Robyn Cooper talk about bringing Welcome...? into the world

As new play Welcome...? runs in the Bridewell Theatre's Lunchbox Theatre season, Kirsty Herrington of www.jonathanbaz.com caught up with the show's writer/performers Lily Lowe-Myers and Robyn Cooper to learn a little more about the story behind delivering this pregnancy-promoting production into the world. 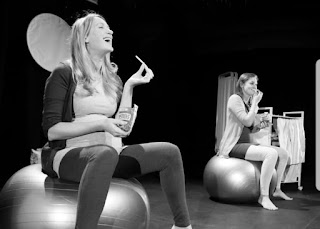 LLM:    It explores creation from the point of view both of bringing a life into the world and creating a piece of theatre; and the uncertainty, excitement and fears that come with both of those journeys.

LLM:    I’ve written a show every year for the last six years, so this year when I began thinking what’s the show going to be for this year, it was a very different show. Then I became pregnant and I thought, okay that will influence the show in some way, and then Robyn also became pregnant and it was like, wow okay, this is a very unique time.

I was listening to an audio book and this idea of a scientist who had allegedly asked for women to put themselves forward to be surrogate to a Neanderthal baby, and it really sparked something in my mind about what kind of woman would do that. What would be her reasons having decided to do it, what would be her fears and expectations? The similarity between the pregnancy and the creative journey just became very apparent while I was writing it, because I had three weeks to write it and I became aware that our last show would be three weeks before my due date. Knowing that there’s this impending deadline where whether you’re ready or not life is going to change, and I had this impending deadline of ready or not we would start rehearsals so I had to bring something into the world...

That creative struggle to birth something and then the fears of how it will be accepted and what it will turn into, has strong parallels to how I feel as a woman being pregnant.

RC:    We met when we were four in a swimming pool. One of our mums liked the other mum’s swimming costume. We were at the same nursery school already in Nottingham and my mum had already seen Lily’s mum leaving a few times and had thought “oh, I’d quite like to be her friend.” So they became friends and then they made us be friends and we stopped going to the same school shortly after but remained friends throughout. So 30 years of friendship this year...

LLM:    Aged five...aged six, we’d be making up our own plays and our first film when we were about eight.

RC:    We made a very good film that Lily wrote and directed when were like ten, but before that we made some bad films!

LLM:    Including one film where Robyn plays a kung fu baby! And then I moved down to London after studying Drama with English Literature in Manchester and we moved in together ten –

LLM:    Twelve years, oh god. And then we started doing plays together, we set up our company together, Hatstand Productions. Robyn writes the films for Hatstand Productions and I write the plays and then we both star in both. Being able to work with somebody that you’ve got that history with...there’s a lot that we take for granted that you wouldn’t usually get in the normal few weeks’ rehearsal period.

KH:    How easy is it to work together, with the two of you being such close friends?

RC:    Well it helps to have a very diplomatic director for those rare moments when we both have very different strong views! We just hand them over to Matt, our director, who comes up with a third option that is better and incorporates both.

KH:    So there aren’t any kung fu babies in your shows?!

LLM:    Next year’s show probably will have babies on stage because I’d love to explore what that means and how that works and how exciting that is for an audience, and as performers on stage how do you respond to this other being and still have a play.

KH:    How do you find Lunchbox Theatre?

RC:     I love the idea. I feel like we’re all very, very busy, almost too busy perhaps, and.. it makes you take a lunchbreak for the people who work nearby, hopefully gives them a real reboot to go back to work but also doesn’t cut into family time, evening time. I find it very exciting to be able to tell a story in 50 minutes.

KH:    What’s been the reaction so far to the play?

LLM:    It’s been great. One of the things that struck me on our first performance in London...what I was most shocked by was the difference in reactions. Everybody had really enjoyed the show and were saying very complimentary things, but how they felt and how they interpreted the show was very different. There were some who found it hilarious, others found it disturbing, and others found it really inspiring and it reminded of them when they were pregnant, and somebody found it serious and scientific. There was a real range from the personal to the scientific to the empowering. I was just hearing different people’s responses and I thought, wow, I don’t think I’ve ever created a play before that has ever been so open for different people to interpret in their own unique way.

KH:    What would you like the play to achieve?

RC:    One thing I would love would be for someone else to take it on after us. Wouldn’t it be amazing if when actresses get pregnant, instead of thinking “I’ve basically got about six weeks before I can’t cast anymore,” they thought “I can play that!” There’s something about getting older as an actress that a lot of the brilliant roles disappear but you know you might play Lady Macbeth one day. It’s there, waiting for you, this incredible role. Wouldn’t it be extraordinary if there was this piece of work where people could think “we could put this on, I could find another actor and we could explore this.” I think it would be a wonderful experience. Instead of being a play where it’s “we can get away with you being pregnant,” it could be “the fact that you’re pregnant is what means you can tell this story really well,” and each person would bring something different to it because their experiences are different.

KH:    From your own experience and that of your friends, how far into pregnancy can women work in theatre?

RC:    It’s different if you’re already in a show and you get pregnant, it’s something you can negotiate with the producers, and then it depends on how much you’re showing. I went for a casting when I was eight or nine weeks pregnant and I asked the casting director’s assistant when they wanted to know, and they said when you’re starting to show. Everyone is very careful to be sensitive about it which is wonderful, but no one knows. It’s different for everyone.

LLM:    Realistically there is a lot less work if you’re pregnant. From speaking to my friends who are also actors, if they’ve worked when they’ve been pregnant it’s because they didn’t say before they got the job and then the job has worked around it, but I don’t know any who got a job because they were pregnant. I was trying to understand why, because there are roles where people play someone who’s pregnant. I can see there’s a lot of fear around that, that it’s easier to bring in an actress who isn’t pregnant and just get her to wear a pregnancy suit, and sometimes that’s because in one scene you’re pregnant, in the next you’re not. So that was kind of part of wanting to create something where pretty much whatever stage of pregnancy you were at at could be used in the play, and to also take away the fear and to put together a research document.

We were interviewing other performers who either have worked when pregnant and what their experiences were... the experiences of people who weren’t able to get work when they wanted it, and some people didn’t want to be doing a theatre show... to collect as many voices as we can, because for directors and producers who are putting on a show and maybe considering working with a pregnant actress there’s not very much out there.

We wanted to brainstorm other ways for smaller theatre companies like us to be able to do it in a way that we never feel pressurised...which is how we came up with the idea to get a collective of actors. We put the advert out for pregnant and non-pregnant understudies and the feedback was so positive. There are all these pregnant performers out there who want work! This idea that maybe they don’t want to be working is definitely challenged in that sense.

KH:    How are you finding performing while pregnant?

LLM:    So far actually it’s been a lot less restrictive other than having to put on and do up shoes, which is definitely the most challenging part of the show for me.

RC:    It’s very compassionate that it’s in the middle of the day. It’s fun to play and like Lily’s character says in the play, you could write a play about pregnancy where there’s so much angst around losing the baby, and I think that would feel quite different every day being like “okay how do I get myself ready to go there but protect myself?” It‘s nice to share the joy, to share what an exciting, unknown, random time this is.