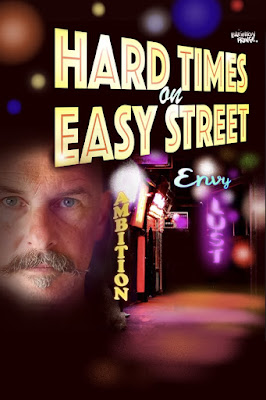 Hard Times on Easy Street marks a brave foray into the world of musical theatre from writer Julie Burchill. A paean to Brighton, the city that she has made her home for 25 years, Burchill’s show is set in a nightclub and for this week, is performed immersively at Brighton's  Latest Music Bar venue.
Middle-aged Otto (Matt Wright) has owned and run his Easy Street nightclub for years. Resident diva Elle (Deborah Kearne) is as wise she is weary for her 50 years, when bustling into their lives comes 20-something Anna (Temisis Conway) who’s auditioning to be the new chanteuse. Joseph White completes the Easy Street team as bouncer Precious.
We learn that Otto is gay with an unseen long-term partner.  Anna is virginal and fancies Otto, while lesbian Elle can barely keep her hands off the younger girl. When bisexual Rory (Seth Morgan), a man with a murky past and a ruthless corporate and sexual appetite who is eager to buy Easy Street, appears on the scene there are moments of menace and exploitation that pierce the otherwise halcyon idyll of the club trio’s curious triangle. Burchill certainly manages to tick off L,G,B and Straight from the checklist of today’s lexicon of love and if some of her dialogue is a tad cheesy, her acerbic look at some of today’s common hypocrisies, for example society’s more tolerant (blind-eyed even) attitude to same-sex predation, makes for a refreshing perspective in the world of new musical theatre writing.
The music is brilliant. Robin Watt, an accomplished saxophonist who alongside Michael Edmonds on guitar plays live each night, has penned a score that’s heavy on jazz and R&B. It’s a delight to listen to, with some numbers, particularly Otto's Incorrigible You sounding as though they could have been lifted straight from the American Songbook.
Currently standing at around two 45 minute acts with a 15 minute interval, if some of the writing were pruned and the interval dropped, it would make for a punchier one-act piece. The songs are deliciously tight though and with a sharper pencil and a venue that’s easier on the neck-strain than the Latest’s head-swivelling sightlines, this could be the genesis of quite a show.
Runs until May 23rd
Posted by Jonathan Baz at 07:46