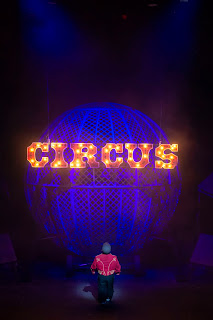 Returning to London's West End, Cirque Berserk deliver an evening of timeless human genius.
Bursting onto the stage like a pride of lions huddled together in perfect unison, were 7 agile men that hooked the audience into the very first extraordinary act of the night. The Timbuktu Tumblers, so aptly named, dazzled the crowd with their acrobatic prowess. The way they held each other up creating several different and quite literally, man-made structures, with such ease is a sight to behold. The danger was ramped up later in their routine when they danced under fire limbo sticks, with nothing short of a whispers breath between the floor and the flaming bar! A marvellous and rare performance to behold.
Another mesmerising act of the night comes from a more traditional circus acrobatic troupe, heralding from Mongolia these acrobats were flying through the air as a fish swims through the ocean. Traditional trapeze artistry accompanied by death defying gymnastic stunts kept the audience clapping through there whole act. One of their stunts being so dangerous a safety mat is required to prevent serious injury or death. Demonstrating both beauty and skill, their ribbon bound performance mesmerised adults and children alike. The tranquil, yet energetic music matched the way they moved so perfectly entwined with the silk, it was impossible to look away. A pin drop could have been heard amongst the audience, for all eyes were entranced by the talented act.
Special mention must be given to 3ft 6inch tall comic, acrobat and showman Paulo Dos Santos who inadvertently came on stage between acts. His is a silly yet charmingly brilliant turn, one which engaged the children and kept them on their toes, with nuances that only the adults would understand to keep them giggling. It truly was a fulfilling sight to behold when a man who was from first initial reception seen as merely there to fill some laughs on stage, was also able to also perform some of the most challenging circus acts of the night. A touching tribute to the show.
The finale, a diesel fuelled spine tingling danger act was truly the definition of ‘Berserkus’. The Lucius team a group of professional dirt bike riders and the Globe of Death. Up to three riders flying inside the globe riding upside down while practically touching elbows as they zoom past each other at upwards of 60mph. A wild finish to an exhilarating show that, for family entertainment in the West End, is up there with the best.
Runs until 11th September. Tickets available here
Reviewed by Christian Yeomans
Photo credit: Piet-Hein Out
Posted by Jonathan Baz at 12:29