The Art Of Banksy - Review 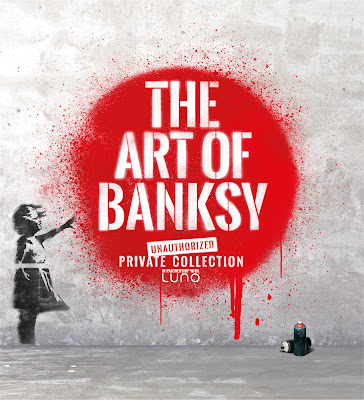 The Art Of Banksy, an exhibition of the elusive street-artist’s work that true to form is not authorised by the man himself, opened earlier this year at London’s 50 Earlham Street Gallery.
Tracking Banksy’s work from his emergence in the 1990s through to the present day, the exhibition marks a carefully curated collection that, if nothing else, will stimulate your reactions. This website last reviewed Banksy’s work at Dismaland, the bemusement park he mounted in Weston Super Mare’s disused lido in 2015 - so the time is right to catch up with this intriguingly eclectic creative.
Banksy’s work is powerfully political and this Covent Garden event is interspersed with his quotes that often bite (devour?) the very hand that feeds him - a phrase that visitors encounter early on in the exhibition reads “The art world is the biggest joke going. It’s a rest home for the overprivileged, the pretentious, and the weak.” Link those words to his 2005 screen print Morons, depicting an art auction at which millions are being bid for a canvas bearing the words “I can’t believe you morons actually buy this shit” and his message is clear, the laugh is on us.
Banksy’s work is as brutally satirical as the world he depicts. When he turns his attention to Nick Ut’s harrowing and instantly recognisable photograph image of the little girl napalmed during the Vietnam War, Banksy places her between Mickey Mouse and Ronald McDonald, these two icons of Americana holding the girl’s hands up high and waving to the crowds. As a comment on the USA, the artist’s message mercilessly skewers our conscience.
Banksy’s politics however are too often disappointingly correct, lacking a spectrum of balanced perspective. His mockery of our world, albeit necessary, picks on selective targets that focus more on the artist's chosen causes to champion, rather than balanced debate. His Walled-Off Hotel that challenges Israel’s relationship with the Palestinian Territories is a powerful graphic that offers up material for a fair debate. But where criticism could be levelled at those same territories, say for their murderous intolerance of the LGBT community, then Banksy’s silence disappointingly deafens.
Much of Banksy’s famed humour and wit has been assembled for the event, but the display is not exhaustive. If one is hoping to catch a glimpse of “Love is in the Bin” the artist’s famously self-shredding take on his “Girl With Balloon” that recently sold at auction for $25 million then steel yourself for disappointment.
Interspersed with video interview clips from Banksy’s printer Ben Eine, The Art Of Banksy is an exhibition of artworks that may well entertain, challenge, inspire or offend. As an excuse to step inside from the capital’s cold winter, the event is a fascinating distraction.
Booking until 22nd May 2022
Posted by Jonathan Baz at 19:35