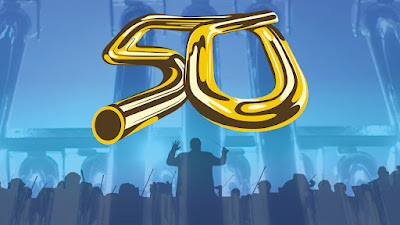 For one night only and under the baton of Simon Dobson, the Royal Philharmonic Concert Orchestra marked the 50th anniversary of the release of Mike Oldfield’s Tubular Bells. In some ways any orchestral performance of Oldfield’s groundbreaking album will always be ersatz, as back in the 1970s it was the composer himself who played every instrument in the work layering the recording together over weeks, track by track. When one considers that this was in pre-digital times, with Oldfield only having access to multi-track analogue recording equipment, this makes his original album all the more remarkable. Dobson however is a gifted musician with an intimate understanding of Oldfield’s work. His arrangements of the two Tubular Bells pieces, together with a collection of Oldfield’s other lesser-known recordings, make for an evening of fine music.
The concert initially comprises the first parts of both the Ommadawn and the Hergest Ridge albums with the music and perfectly hazed lighting plots creating an atmosphere of wonderfully mellifluous melody. Moonlight Shadow, Oldfield’s chart-topping single concludes the pre-interval proceedings with Ella Shaw powerfully delivering the vocal honours.
The second half kicks off with the hallmark opening bars of Tubular Bells, the 15/8 time melody that was to define not only The Exorcist's score but also lay the foundations of Richard Branson’s Virgin Records fortune. The RPCO are augmented by featured soloists throughout the performance, with Pete Callard’s Lead Guitar work particularly stunning through many of Tubular Bells’ challenging riffs.
Tubular Bells of course requires a charismatic Master of Ceremonies. Oldfield’s original MC, Vivian Stanshall set the bar high (it was Stanshall’s distinct pronunciation of “tubular bells” that prompted Oldfield to name the album thus) and there are few finer voices than that of Brian Blessed to provide the wry bombast that the role demands. Proud of his 86 years, Blessed bestrides the stage like a colossus through Part One of Tubular Bells, with his Caveman in  Part Two proving an equal delight.
If there is one criticism of the gig it is of the video projections that are (sometimes dimly) shone onto a screen above the orchestra. Ranging in style from what looks like a Lloyds Bank black horse advert through to what could be a Microsoft screensaver based on the Tubular Bells 50 logo, the imagery is tacky. The Royal Albert Hall is one of London’s grandest venues and while the players magnificently fill the space with their music, the video work proves to be an uninspiring detraction, dwarfed by the hall’s imposing grandeur. If projections are to be used going forward they should be grander and LED based or not used at all. A waggish suggestion, overheard on leaving the venue, was that maybe scenes from The Exorcist could be shown!
The whole affair is wrapped up with Dobson’s energetic arrangement of the Hornpipe – sending the audience out into an autumnal Kensington with feet tapping, hands clapping and grinning at the evening's wave of nostalgia that has flooded over them.
Posted by Jonathan Baz at 11:02