Churchill Theatre, Bromley
****
Written by Peter James
Adapted by Shaun McKenna
Directed by Jonathan O'Boyle
Looking Good Dead offers a cocktail of irresistible elements that make for fine modern theatre. A story from Peter James’ Detective Superintendent Roy Grace series and acted by stage stars and EastEnders icons Adam Woodyatt and Laurie Brett all contribute to a gripping tale.
The play starts with a young female sex worker, found dead with her throat slashed. As the plot evolves, Shaun McKenna's adaptation of James’ novel takes the audience on a gripping, moving tale that as well as encompassing the thrill of a murder mystery, also explores complex family emotions of love, secrets and deceit, against a stomach-churning backdrop of violent pornography and abuse.
Woodyatt’s take on protagonist Tom Bryce reveals the darkness of human beings. His is an innocent man, a good citizen and a loving father who has worked hard to provide for the family. The play’s plot is surprising, plumbing unexpected emotional depths as the first act outlines family conflicts that contribute to the plot’s unfolding after the interval. Secrets maybe the shadows of the soul but justice ultimately prevails. James tells us that everyone has their dark side, no one is innocent and that no good deed goes unpunished. But there is also the message that through the darkness there is light and hope.
Not just a thriller, director Jonathan O’Boyle extracts some well-played comic moments too, that all combine in an evening of cracking entertainment.
Runs until 23rd April, then continues on tour
Posted by Jonathan Baz at 22:43 No comments:

Anyone Can Whistle - Review

Southwark Playhouse,, London
***
Music and lyrics by Stephen Sondheim
Book by Arthur Laurents
Directed by Georgie Rankcom
Anyone Can Whistle is one of Sondheim's lesser known works and probably, rightly so. A curious piece that explores power, fascism and the othering of minorities via a curious interplay of an outdated mockery of mental illness, and an implausible melee of manufactured miracles. It all makes for an occasionally tedious 2 1/2 hours at Southwark Playhouse, interspersed by musical numbers that too often err towards corn rather than Sondheim's signature scalpel-like satire.
For a story this whimsical, a show’s company needs excellence throughout to carry the piece and disappointingly, for the most part, this cast lack the required emotional heft. And as the on-stage talent level wanes, so too does the audience's attention.
That being said, there are two standout performances from Alex Young and Chrystine Symone. Young captures wit, timing and a magnificent presence – with just a soupcon of channelled Hillary Clinton - as Cora, the town's corrupt and devious Mayoress. Young’s musical theatre genius sets her apart amongst her generation and in this production her take on A Parade In Town marks her out as a future Dolly Levi – one can only imagine, blissfully, what she could do with Before The Parade Passes By.
As Nurse Apple, Symone is offered a more challenging role of obscure complexities. Vocally she is magnificent, never better than in her outstanding interpretation of There Won’t Be Trumpets. It is only a shame that in the musical’s exploration of the nascent love between her and Jordan Broatch’s Hapgood, that their performance falls short of Symone’s magnificence.
Above the stage, Natalie Pound's 5-piece band make fine work of this rarely heard score.
Runs until 7th May
Photo credit: Danny With A Camera
Posted by Jonathan Baz at 21:25 No comments:

Philharmonia At The Movies - E.T. The Extra Terrestrial - Review 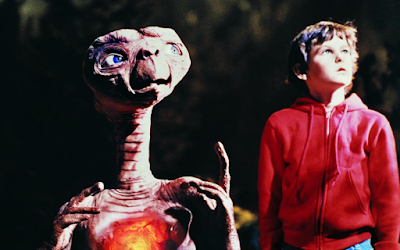 Steven Spielberg’s genius in narrating a story through film, is unsurpassed. His envisioning of a plot’s evolution told through either grand scenic presentations or just the subtlest glance of a protagonist, holds us spellbound. And no more so is Spielberg’s craft evident than in his 1982 blockbuster E.T. The Extra Terrestrial, that told of an alien creature (E.T.) left behind in California when its spaceship had to hurriedly flee Earth to avoid capture, the movie then exploring the bond that evolved between E.T. and the young boy Elliott who found and befriended the creature.
The story is genius in itself – in a concept first explored by Spielberg in the 1977 movie Close Encounters Of The Third Kind, his aliens are friendly. They come in peace, with the theme of the 1982 picture being a child’s and E.T.’s innocent love for each other. And so, with a combination of stunning performances, ingenious special effects – all the more so when one recalls that this was before the time of today’s ubiquitous CGI -  and gorgeous photography, Spielberg’s story was told.
But there was a further component, critical to the hallmarking of this movie as worthy of the pantheon and that was its score. And in Spielberg’s wonderfully well-established partnership with composer John Williams, so was a symphonic accompaniment achieved that not only enhanced the arc of the story, it served to tell parts of the story too such is Williams’ talent.
Last week, under the baton of Anthony Gabriele and for one night only, London’s Philharmonia Orchestra played William’s score live alongside the movie being screened. Gabriele is a master of synchronising an orchestra’s live performance to the unforgiving fixed demands of a movie screening and his coaxing the aural beauty of the Philharmonia’s talent, opened up new layers of nuance to this wonderful fable.
No plot discussions here – most people know the tale, how it develops and how it ends. But when one recalls the movie’s unforgettable scene of Elliott, with E.T. in his bicycle basket, flying (cycling) in silhouette past the moon – an image that now defines Spielberg’s own production company Amblin Entertainment – it is Williams’ Flying theme that we hear. And to hear that glorious melody played live as Elliott dreamily pedals across the screen is just exquisite.
The Philharmonia are of course world-class, and their delivery of William’s score was flawless. To name individual performers is invidious – they are all masters (and indeed many are Professors of their chosen instrument) but amidst such a plethora of perfection, to be able to glance down from the screen and observe harpist Heidi Krutzen adding to the film’s gorgeous sensitivities or in contrast Antoine Siguré’s menacing work on the timpani was sublime. And of course, during Flying, it was Zsolt-Tihamer Visontay and Emily Davis whose violin sections were chiefly responsible for making the audience’s spirits soar.
This combination of a classic film, projected over the heads of the players and instruments of one of the finest orchestras around and all helmed under Gabriele’s masterful baton, created an evening that that was simply out of this world!
Posted by Jonathan Baz at 16:41 No comments: