Directed and written by Paul Tanter 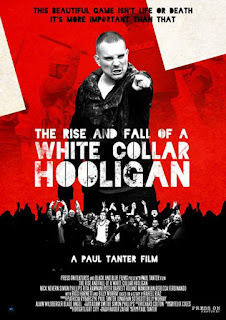 The Rise and Fall of a White Collar Hooligan is a movie that pulls few punches as a gangster thriller and which, for the most part, defines its style very much as that of 2012 London.

Loosely based on true events, the film charts the path of Mike Jacobs, played by Nick Nevern,  an unemployed football fan who is no stranger to organised football violence, and who as a last resort is persuaded by old friend Eddie Hill, ( Simon Phillips ) to become a courier for a criminal organisation, moving hardware and equipment around the capital to support the mob’s widespread credit card fraud operations.  The banter between Mike and Eddie is tightly scripted, and as all good London based scripts should do, provides many witty moments as the two friends mock each other. As the criminal activity of cloning credit cards does not involve drugs, and it appears to be free of people getting hurt, so Jacobs’ simple moral concerns are largely, eventually, put at ease and he agrees to join his friend. Where the script makes reference to the only people losing out being the banks, the film’s plotline strikes a chord with current day public  contempt for these high-street giants, particularly in the light of the recent interest-rate fixing scandal.

Of course, violence is never far away, with criminals seeking to protect their turf, their lives, and their money, from other gangs, from disloyal gang members and the police. The deeper Mike becomes involved within the gang, the harder his choices become, as his own values become distorted under the influence of money and drugs.

Nevern and Phillips both put in performances that are gritty and believable. Nevern plays a man who is seeking no more than primal achievements. He wants employment, money and the respect of a woman who he in turn can provide for. His flawed struggle to achieve these basic goals is the simplest of premises that makes this story so watchable.

The supporting cast are generally strong. Rebecca Ferdinando , in particular as hooker Nicey Pricey, whose real name Mike cannot recall, puts in a great turn as a lady who has seen it all. Soap legend Billy Murray of The Bill and EastEnders fame , who also executive produces the movie, provides a chilling gangland boss, able to encourage Mike’s rise within his organisation yet capable of showing no mercy whatsoever when required.

Paul Tanter has helmed a well crafted story . With photography by Haider Zafar that is tight and contemporary, combined with Richard Colton’s editing , he ensures that from a purely visual perspective alone , the film is superbly paced. And with more than a nod to how Europe and the financial ( and criminal ) world  has been shrunk by modern day technology and communication, a fair part of the film’s action is shot on the streets and metro of Paris, which provides a further air of authenticity to the story’s credentials.

Tanter’s one flaw is the extent to which he includes football hooliganism in the picture. Cleverly, this aspect of Mike’s early life and background provides not much more than an early-on scene setter, with occasional “cut to” scenes of hooliganism. Whilst menacing gangland violence is easy to portray on screen, evidenced by the horrific beating Mike endures in a Manchester warehouse, football mob unrest is difficult to film on a modest budget. The scenes of soccer thugs screaming at riot police, who in turn lay into them with batons and truncheons did not convince in the way that the director would have intended. One should also bear in mind that recent years have seen British football hooliganism become less ugly than in decades past and as such, the shots of such violence created a modestly dated air to the story that was undeserved.

Overall though, the movie is gripping. With humour, menace, and moments of hard bloody violence, it provides a 90 minute white-knuckle ride through some of Europe's ganglands of the 21st century.