This review was first published on The Public Reviews. 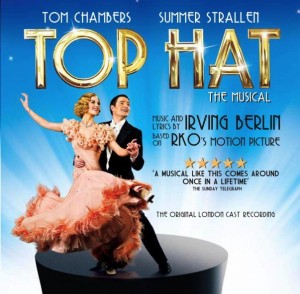 The Original London Cast recording of Top Hat Is a delightful recording of a show that has brought a slice of 1930s Hollywood to the West End. Irving Berlin’s words and music proved to be the bedrock of one of the most successful films of that era, and the movie gave the world several musical numbers that have since been immortalised.


As well as songs, the film is famed for its stunning Busby Berkeley choreography and dance routines, with the legendary Fred Astaire and Ginger Rogers being a massive act for Tom Chambers and Summer Strallen to follow. Chambers is of course one of the leading dancers of his generation and his casting in the stage show has been an inspired choice. However, on the strength of this CD, with the imagery of the show’s opulence and his own stunning footwork and tap dance stripped away, his voice needs more impact. Tuneful and clear throughout, though with an accent that is at times a little too forced, his numbers lack an “American Smooth”-ness that should be a strength of classics such as Cheek to Cheek along with Top Hat, White Tie and Tails and Putting On The Ritz.

Summer Strallen’s performance transfers effortlessly to the recording, in particular the sublime delivery of her number You’re Easy To Dance With. In a smaller but equally polished performance, the duo of Vivien Parry and Martin Ball sing Outside of That, I Love You with a deliciously sarcastic comic turn.

This 2012 recording is well produced and very easy on the ear. For those that have seen the show, you will love the CD for its aural recreation of the Aldwych Theatre’s magic. If you have not seen the production then the recording , replete with the authentic sound of much of Chamber’s tap work, is a lovingly crafted re-working of a Hollywood classic.