Certificate 18, available on Blu-ray and DVD from September 30th 2013
***
Directed by Richard Raaphorst

( ALERT: Some of this review may not be for the faint-hearted)﻿﻿ 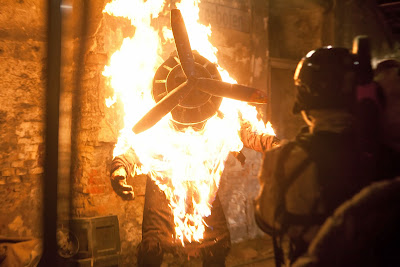 Frankenstein’s Army is the best B Movie in ages. It’s a ridiculous plot, serviced by dodgy dialog with a mad scientist straight out of a 1950’s horror classic.

As WWII is coming to an end, a group of Russian soldiers who are mopping up the last stragglers of the Nazi war machine on the Eastern Front, come across an apparently deserted farm. Local graves have been robbed and electric cables strewn everywhere lead to generators and lightning conductors.

The farm is of course a laboratory cum factory and it is where the evil Dr Frankenstein (son/grandson of Mary Shelley’s original, I didn’t quite work out the family tree) has been stitching together corpses. But wait for it, this Dr F. is replacing limbs with weapons. Drill bits, steel claws, spiked helmets for skulls and even the engine and propellor unit of an aeroplane. Get the picture? Its gruesome but very imaginative and as the story pans out as the current gets switched back on, various Russians come to exceedingly gory ends. In a visionary step towards advancing world peace, Dr Frankenstein opens up the skull of a Communist, removes the left half of his brain (the special effects and prosthetics are wonderful) and replaces it with half of a Nazi's brain. Ridiculous but inspired fun.

Funded in part by the Czech Culture Ministry, Richard Raaphorst’s debut has clearly had a few bob to spend on special effects and it shows. If you are seeking a film that bears a nod to the horror of Eli Roth’s Hostel, the grit of Peckinpah’s Cross of Iron and has clearly been inspired by that TV programme favoured by kids and geeks alike, Robot Wars, then look no further. This movie only lacks Jonathan Pearce as narrator. An unmissable 3 star wonder.
Posted by Jonathan Baz at 12:20