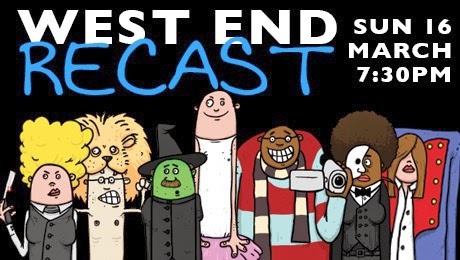 Every now and then the planets align and an occasion of breathtaking excellence is created. So it was at the Duke Of York’s Theatre, where Adam Lenson's revue West End Recast was staged for one night only. An ingenious conceit - invite the best of West End talent to sing numbers that for reasons of age, race, gender, physique, whatever, they would be unlikely to perform in a regular commercial casting. Though this review features only a few of the sixteen performers, without exception all were outstanding, with turns ranging from comic brilliance to spine tingling magnificence.

Emma Williams got proceedings underway as a Diana Ross inspired Billy Elliott singing Electricity and as she warmed the crowd up so followed the incredibly voiced Jon Robyns with I Cain't Say No from Oklahoma!. Robyn’s be-suited straight-faced take on Ado Annie was to prove the first pastiche highspot of the night. Other first half gems included Gareth Snook's sublime interpretation of Sally Bowles' Cabaret. Bowler hatted and with spread legs suggesting a nod to Fosse (notwithstanding a bulging crotch) his red-stockinged chanteuse was a blast. Martin Callaghan was listed to sing A Chorus Line's Dance Ten Looks Three, but actually opened his routine with I Hope I Get It from the same show, making a witty if ironic and poignant reference to his own need for a job in the light of Stephen Ward's untimely closure. Simon Bailey's rarely heard Make Them Hear You from Ragtime proved the most stirring moment of the half, as he powerfully brought home the message of the song's plea for liberty, given a distinct twist sung by a white man. Closing the act, Nick Holder sung Defying Gravity in an arrangement that was both soulful and outrageous. Written by Schwartz to be sung by an adolescent student girl, to hear the modern classic performed by a beautifully voiced but nonetheless portly and grey-haired man, summed up the quirky brilliance of the show.

Frances Ruffelle opened act two with Wilkommen from Cabaret as the show’s gartered, gamine, Emcee. Fresh from her Paris focussed cabaret set, Ruffelle's accent was perhaps a tad more French than German, however her neatly choreographed take on Two Ladies, accompanied by the gender-reversed Snook and Callaghan was a hoot. Laura Pitt-Pulford was then to give what must surely be the most re-imagined Tevye ever. Her take on If I Was A Rich Man displayed her beautiful voice having an almost klezmeresque authenticity whilst her performance suggested a Jewish Princess with movement that simply sizzled. Michael Matus defined the coruscating bitterness behind Joanne's The Ladies Who Lunch from Company in a performance that was powerful and at the same time wryly tragic.

Bailey returned as Disney's Ariel with a hilarious Part Of Your World, but it was with Tracie Bennett's Ol' Man River, a song claimed originally, classically and above all, appropriately by Paul Robeson, that for the first time amongst the audience, jaws dropped. Bennett's take on the Showboat classic was so moving and inspirational that it almost prompts a recasting of the show, with the diva playing Joe the muscle bound dock worker.

It was left to Cynthia Erivo to close the set and where Bennett had dropped jaws, Erivo nailed them to the floor. Taking two songs from Streisand's Funny Girl she opened with a masterfully understated People, before segueing seamlessly into Don't Rain On My Parade. No wonder Simon Cowell has cast this actress to lead his Palladium show - her X-Factor was off the scale as her petite frame produced a sound that filled the Duke Of York's with a performance of clarity, expression and sheer beautiful power.

An ensemble encore of When I Grow Up was a neat touch that sweetly rounded off the evening. With Daniel A. Weiss’ 5 piece band, Adam Lenson has created an event of magical potential. The show demands to be repeated, it is simply the very best of London's talent.
Posted by Jonathan Baz at 00:55