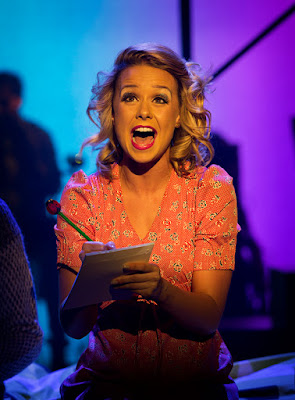 Based on the book by Mike James
Directed by Anna Linstrum

It's a neat conceit - turning a long defunct magazine brand, synonymous with the childhood of girls of the 70s into a night to remember for those very same girls, now of course women.

Jackie The Musical tells the story of Jackie played by Janet Dibley, a 54 year-old divorcee who, while navigating post-marital life (including but not limited to coping with her ex-husband's impending nuptials to his younger fiancée, the world of dating and her son's life choices), discovers she is not alone in doing so.

After finding old copies of the magazine one alcohol-fuelled evening, her teenage self materialises, providing Jackie with the insights that used to guide her thoughts, gleaned from the magazine from way back then.

What follows is a punchy and genuinely funny script that displays a chemistry between the main cast and lets the actors play off each other with ease. Interactions between Jackie and her best friend, Lori Haley Fox’s Jill, are particularly enjoyable.

The dialogue is neatly intertwined with musical hits from Jackie's era that, by their nature, compel the audience into a singalong. Under Dan de Cruz's direction, the house band - situated upstage throughout - brings a great deal of energy to the production and a punchy score.

Whilst the pace occasionally slows, Daisy Steere's teenage Jackie is a standout star and Graham Bickley as Jackie's ex-husband John is surprisingly engaging and funny and with a terrific voice to boot and Ben Harm's Frankie, the proprietor at the local cafe and wine bar, proves an outrageous delight.

Jackie The Musical is joyously upbeat, with a welcome and refreshing message of empowerment that’s guaranteed to entertain.