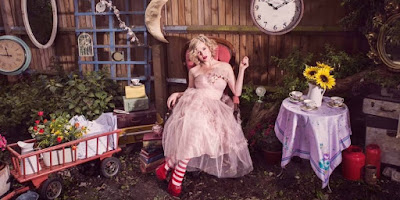 Amongst the best of her generation, Ceili O'Connor has achieved numerous West End castings with a talent that has seen her understudy many a leading lady, truly an achievement in itself. With understduies all too often overlooked, it has not been until recently, when we have seen some of London's finest shows having to famously call upon their understudies when the headlining star has been indisposed, that audiences have been famously reminded of just how good those covering performers are. Their performances are typically nothing less than magnificent.

But for O'Connor however, who has covered some of the biggest roles in town and on tour, fate has never yet allowed her to go on in the leading roles that she has understudied. Ever.

So what better way to showcase her cabaret than as The Understudy - treating a packed audience at the Century Club to a whirl through many of the numbers that she had evidently honed to perfection, though enchantingly giving each of these classic songs a delightful re-imagining.

To confess, I have never seen O'Connor on stage in a large scale commercial show - rather I have only seen her deliver perfection in several fringe productions through the years. So it was appropriate that whilst her set was wittily attributed to the role of the understudy, early on in her act she paid tribute to her fringe career too, with a sublime take on Someone To Watch Over Me from Crazy For You, in which she had featured some years ago at Highgate.

O'Connor's patter was confident, assured, touching and witty. It says much for the actress that so much of her set was shared with fellow performers - and it says even more that each duet or ensemble number was performed with a meticulous yet relaxed precision. When Emily Tierney and Sophie Evans joined her for I Wish I May (surely one of the best close harmony songs written for three female voices ever) the moment was nothing short of spine-tingling. There was delicious supporting work from her fellow understudy troupers Imelda Warren-Green, Eloise Davis and Emma Kingston - and in yet another ingenious re-interpretation of a classic number and accompanied by Matthew Harvey on guitar, she offered up You Must Love Me from Evita (another leading role that O'Connor has covered) with a tenderness that revealed new layers to the song.

It wasn't all show tunes though. An ingenious act-two opener saw her blend the songs that she had grown up with into an intoxicating fusion. Janis Ian, Joni Mitchell, Disney, Cyndi Lauper and even the Spice Girls all became one glorious concoction. There was not a hint of pretentiousness around O'Connor's set list - rather a focus on honesty, wit and excellence, truly the ingredients of a perfect cabaret.

With O'Connor having understudied Dorothy the evening had to include Somewhere Over The Rainbow and there was a neat tribute to Beguelin and Sklar, the composers of Elf. A moment of charming selflessness saw O'Connor invite her talented younger sister Aisling to sing her own composition.

One of the most unexpected treats of the night was when Michael Bradley took over the keys from Tim Evans (who'd done a sterling job MD'ing through the gig) to accompany O'Connor and Eloise in a medley of Billy Joel songs. The selection that opened and closed with New York State Of Mind was perfectly tailored as half a dozen Joel classics seamlessly segued into each other. The medley was a touching tribute to her mum and dad in the audience, Joel being one of their favourites. He happens to be one of mine too and the moment proved magical.

It's encouraging that London's cabaret circuit can attract young performers able to blend the contemporary with the classic. But more than that - they need to breach that fourth wall with elegance and élan. Supported by her guests, Ceili O'Connor performed with a beautiful bravura that was simply a delight. When her cabaret returns to London, don't miss it.
Posted by Jonathan Baz at 06:36