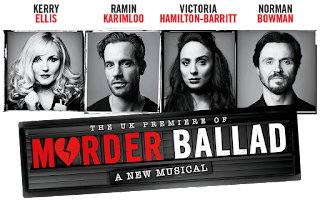 As Murder Ballad opens at the Arts Theatre, I with spoke two of its quartet of performers, Kerry Ellis and Norman Bowman to learn a little more about the show.

Update - You can read my review of Murder Ballad here

JB: Kerry, tell me about the show.

KE: It's a very intimate show, it's a four-hander with, obviously, Ramin, Norman, Victoria and myself. It's at the Arts Theatre, with the lovely Sam Yates directing us.

Murder Ballad has only been performed once before and that was off-Broadway, so it's a very new thing. It's got a bit of rock music in, a bit of country, a bit of musical theatre. It is completely sung through, it deals with real people's situations and, obviously, there's a murder, but I'm not going to tell you who did it!
NB: Kerry pretty much summed it up quite well. It's funny because I've been describing it exactly the same way, as kind of a rock, country piece based on, I think, a very traditional principle of a love triangle. I'm very excited, it's a stellar cast and I just think it's wonderful.

JB: Tell me about your respective characters, to the extent that you are able to. Norman, I'll start with you.

NB: I play Michael and I keep wanting to say he's the sensible one of the story in some respects.

If people have any knowledge of those kinds of relationships that a woman will sometimes go for the dark, edgy character, the bad boy, for a thrill, and sometimes the sensible guy for marriage. It's a bit like that game, "sleep with, marry, or murder” I think Michael is the one that you would end up marrying. I guess he wants to be a bit edgier in places, maybe that's why he falls for Kerry's character like he does, because everybody likes a bad girl too.
JB: And Kerry, what about your character Sara?
KE: I guess in a way she’s quite typical. She has a relationship in her younger years and then that kind of breaks down and she moves on and meets Michael and they have their relationship. She talks through having a child and all of that, and then things go wrong, dealing with all of that too.

She's a little bit dangerous, I guess. She had dreams when she was younger to be a rock star and that didn't work out, so I think when she becomes a mother and gets into that routine lifestyle, she craves a bit of that youth and excitement, to be a rock star again.

I think she's a bit of a rock star in a mother's body! Something I can relate to a little bit!

JB: Who is the show going to appeal to?

NB: Anybody interested in relatively new musical theatre. This is such an unknown quantity to a lot of people. I think that the advertising campaign is great. I think it's been very clever, very catchy.
KE: I think what's interesting, for me especially, is just that it's so raw and intimate that it's quite exposing. For me, I'm kind of used to doing big, glitzy musical theatre. Costumes, lights, sound, all that kind of showy stuff. This is very raw. It's four regular people telling their story and it's very close.
NB: It's bringing more of the fringe values into town.

JB: Norman, what do you mean by "fringe" values?

NB: Fringe values, for me, first of all, they always tend to be a bit more bite sized. They're about shows that are not there for the duration, to run for years and years. They have a known shelf life and I think, as a result of that, something else is given to those productions.

I know, of course, at the end of the day, it's a business and people still need to make their money back, but a fringe show is not always about the money. It's about putting something on; from beginning to end that is something for the audience. I think it represents great value for money, to be honest.
I know that if you go and see something like Wicked and you pay top dollar for it, you're helping to fund a big production that’s got enormous running costs. When you bring all of the running costs down and you go into something as intimate as the Arts, it can say more about the content that you're going to see, rather than lavish production values.

JB: The show's already extended before it opened, which is good news. Was that something you were expecting to happen?

NB: I wasn't surprised, knowing that Kerry and Ramin were attached to it. I don't mean that as a disservice to either myself or Vic, because we both have worked solidly for a long period of time, but if you're looking to bring audiences in then you need people with that extraordinary profile.
JB: Kerry?

KE: I'm blushing now. Thank you, Norman, that was very kind of you.

KE: Likewise, I think what attracted me to it was the fact that it's an incredible cast. We all come from slightly different areas and that's what's exciting, for me especially.

JB:   Kerry and Norman, thank you both and break a leg with the show!