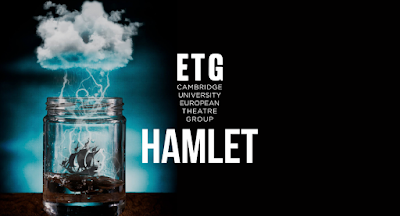 Predating the UK's entry into the EEC/EU (and quite possibly outlasting it too!) the Cambridge University European Theatre Group has over the years amassed a fine degree of cross-Channel cultural integration. To some extent, this year is no exception and having just completed a Swiss tour via Belgium the group bring their 2016 production of Hamlet to the Cockpit Theatre for one day only.

The play has clearly been an ambitious project as director and adapter Emma Blacklay-Piech (herself a Third Year student of Anglo Saxon, Norse and Celtic no less) has seen fit to trim out much of Shakespeare's original word count and, setting her show on board a boat, replace the chopped out prose with musical numbers under the dubious pretext of calling them sea shanties. By such a decision has the whole ear of Switzerland been rankly abused. But students will be students and to be fair, it can take time to learn that it is nigh-on impossible to improve on Shakespeare's verse.

But while Blacklay-Piech may have erred in her decisions of style and theme, she’s cast the play magnificently. Sam Knights (Third Year, studying English - and it shows) plays Hamlet, making a fine job of it. The role is vast and the speeches (even truncated) are long and unwieldy. Whilst Knights may not have uncovered anything new in the part, he displays impressive potential. Likewise Tim Atkin's Claudius. A PhD student and noticeably that bit older than most of the company, Atkin brings a plausible contemptibility to the scheming King.

Some of the casting has been gender-blind and again, credit to Blacklay-Piech for her impressive choices of Amy Malone as Horatio and Lucy Dickson and Ashleigh Weir as Rosencrantz and Guildenstern respectively. Malone creates a wise and sensitive friend to Hamlet - while Dickson and Weir live up to the incongruous staging, by not only convincing as Hamlet's bungling (ex) buddies, but also putting in a fine shift on some of the song and dance numbers. The pair have impressive biographies in musical theatre – it’s not often that such experience comes in useful in Hamlet

Colin Rothwell makes fine work of the comic potential of both Polonius and the First Gravedigger, as Bethan Davidson offers an elegant Gertrude alongside Ed Limb's energetic Laertes a mention too to Benedict Flett who pops up well as both the Ghost and Fortinbras.

Perhaps the key moment in Hamlet where tuneful melody is called for, is in Ophelia's mental decline and despair following her father's murder and in this, one of Shakespeare's most complex, fragile roles Matilda Wickham is remarkable. Bringing a beauteous youthful wisdom to the part, with a heartbreaking interpretation of Ophelia’s drowning, Wickham underlines the classic story's tragedy.
Posted by Jonathan Baz at 20:57