Directed and choregraphed by Gary Lloyd 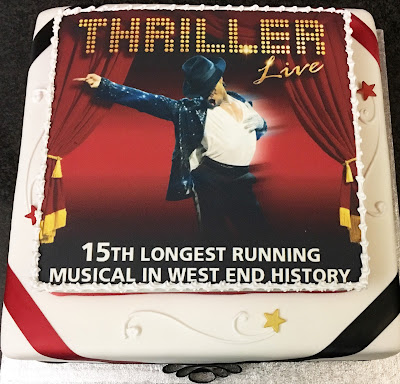 This week Thriller Live celebrated becoming the 15th longest running show on the West End and its audiences thankfully still can’t get enough. From the first hip thrust, to the still incredibly relevant political numbers and the satisfyingly zombie filled Thriller Finale, the incredibly talented cast embrace each song, each moment and each moonwalk as if each note and step were the highest honour.

Director and choreographer Gary Lloyd presents a show that is unashamedly fantastical. Shooting Flowers have styled flashy versions of almost every costume you can recall the inimitable MJ wearing, that stun alongside Jonathan Park's steel and LED set. With Nigel Catmur’s lighting and one heck of a live band, the show is as seamless as any Michael show, even if on a smaller stage.

Michael Jackson wasn’t one to write songs that are easily forgotten, but the sheer volume of his catalogue means that there are more than a few surprises in this fabulous show. Dirty Diana seduces with some fantastic head pieces, while Remember The Time, complete with Egyptian poses and sass, bring the 90s flooding back. There’s also a rollercoaster ride of emotions, with the somber reflection of She’s Out Of My Life, sung with soul by the sweet Reece Bahia and a gender swapped The Way You Make Feel making everyone in the audience feel young and sexy while reminding them that Cleo Higgins (she of Cleopatra, Comin’ Atcha fame), is still a voice to be reckoned with.

Clichéd though it sounds, Thriller Live makes you feel alive - though perhaps not as lively and spritely as the unbelievably talented dancers, who fill the stage with as many backflips, high kicks, cartwheels and grinding as they can muster... which to be fair is the only appropriate reaction when Wanna Be Starting Something comes on. There’s even some comedy as cheeky Leslie Bowman interrupts the narration of the leads and the gorgeous Jamal Crawford is rejected again and again by Cleo. Throw in some baby faced young talent, this time Marcellus Virgo Smith, to portray Jackson's early years and you’ve got yourself one blinder of a show.

Out of the four leads, the closest we get to an MJ tribute is Dajiow, who encompasses Michael Jackson in every step and note, leaving many questioning whether it was really him singing Thriller… and it definitely was. The show isn’t a tribute though, but a celebration of the heart breaking, body shaking, crotch grabbing Man in the Mirror, who is still indisputably the King of Pop.

The West End's 15th longest running musical and yes, we can still feel it.