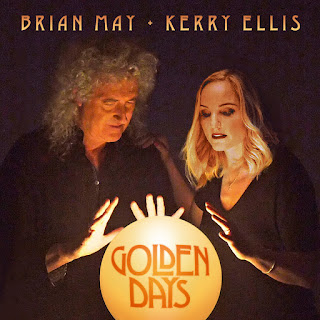 Released this week, Golden Days marks another delicious collaboration of queen and Queen as Kerry Ellis, arguably the finest musical theatre performer of her generation, combines with Brian May (he, famously, of the eponymous rock band) to release their latest collection latter-day classics covered, as ever, with a startling originality.

Ellis' voice has an ethereal timbre that for some years now has been found to sit oh so smoothly alongside May's virtuoso work on the guitar. This album only seals the quality of this inspired partnership. In a range of songs that spans decades, Ellis and May's selection is unconventional. Opening with Amazing Grace, Ellis imbues the hymn with with an unexpected divinity thats deftly picked out by May's fine fingerwork.

The title track references a cover of Golden Days first recorded by the late Minako Honda. May has some history with the number and together with Ellis, offers up an enchanting take on this unfamiliar song steeped, in a tribute to Honda, in a richly Japanese style.

The pair have a fine recent history working with Don Black compositions, giving Black's numbers a typically inspiring re-interpretation. For this album they've chosen his Oscar-winning title song from the 1966 movie Born Free and again Ellis offers up a take on the tune that is as reflective of the African landscape as could possibly have been imagined. John Barry may not have imagined the symphonic vista of his melody being given such a mellow-rock treatment - but such is the finesse of Ellis and May's craft that the song sounds as if it had been originally penned with them in mind.

There's an ambitious leap in tackling Gary Moore's Parisienne Walkways. Connoisseurs of fine guitar work (both of the electric and, ahem, the air varieties) rank the number high in the Pantheon of hits, and to hear May magnificently maraud through Moore's masterpiece is nothing short of wonderful. Ellis' take on the lyrics is of course flawless, though it remains a matter of taste as to whether Moore's gritty original is enhanced by Ellis' filigree (albeit one of understated power) treatment.

In an enchanting nod to Rodgers and Hammerstein, one discovers Carousel's  If I Loved You. The song is one of Broadway's most carefully created crafted, coming close to defining the human condition as it moves, relentlessly, through subtly piquant key changes. Ellis and May treat the song with the respect of the gifted craftspeople that they are - and the result is like stumbling across a newly cut diamond that has been fashioned and re-worked from a beautiful original.

From Queen to The King - there's some Elvis here too, as the pair take on Cant Help Falling In Love, May offering up a gorgeous acoustic treatment.

Comprising 13 tracks in all, with Golden Days Kerry Ellis and Brian May have, yet again, created beautiful music. Add it to your collectio.


Available to download from Amazon, iTunes and available from usual retailers