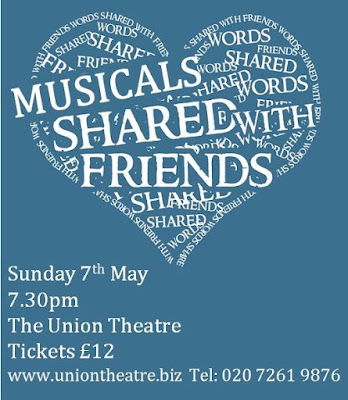 For the past decade, writer and lyricist Robert Gould has been slowly fashioning a body of musical theatre compositions, seeking to introduce more varied and original writing into the industry and collaborating with a number of talented composers - Christopher J Orton, Alex James Ellison and Rob Eyles to name a few.

Following the release of his 2014 album Words Shared With Friends his reputation has grown, and a Sunday night at the Union Theatre saw a 16 strong cast showcase a range of Gould’s work from across the years.

Highlights from the evening were excerpts from The Wonderful Musician, two specific numbers from Gould’s most recent project performed by Hywel Dowsell and new graduate Danny Michaels. The pair sang Music Turns Me On  and  As Long As I Have Music respectively, giving very different performances and taking the audience from hysterical laughter to silence and awe.

Unsurprisingly, the two shows in which Gould had collaborated with composer, Christopher J Orton were to prove the evening's favourites. Giving excerpts from Elephant Juice, Orton and Gould’s musical that tells of 6 characters who incidentally all confess their love to the wrong person or at the wrong time, Shaun McCourt and Brendan Matthew gave an effortlessly breath-taking duet in Perfect Stranger, alongside Lets Just Stay Friends which was given an  emotional rendition by Aled Powys Williams.

Following its successful, sell out run at Ye Olde Rose and Crown Theatre earlier this year, songs from Orton and Gould’s My Land’s Shore that told the tragedy of the Merthyr uprising, were to offer some sensational moments performed by the original London cast.

Michael Rees stunned the audience to silence with a flawless rendition of A Lonely Voice, Rebecca Gilliland gave an emotional and magnificent performance of The Way Things are and Still Even Now. A particularly strong performance was that of the all-female trio comprising Gilliland, Emma Hickey and Kira Morsley singing I know I Love Him. Together with McCourt performing the title song from My Land’s Shore, the extract showed a stunning example of some of the duo’s finest creations.

Concerts like these should be given their dues for they enable the “musical theatre world” to find new bearings and discover exciting new writing.

Praise to Gould, his collaborators and the stunning performers he trusts with his work.

Reviewed by Charlotte Darcy and Ben Stephens
Posted by Jonathan Baz at 20:00