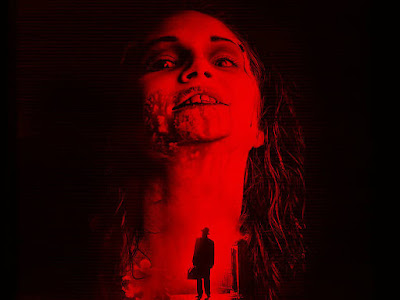 Tonight, Halloween 2017, the stage play of William Peter Blatty’s apocryphal horror story The Exorcist opens in the West End at the Phoenix Theatre.

Directed by Sean Mathias, the story is all about 12 year old Regan MacNeil, a girl from Georgetown in Washington DC, whose becomes possessed by Devil. The play stars Jenny Seagrove as Regan’s mother Chrissy, and Peter Bowles as Father Merrin, the Jesuit priest whose mission is to exorcise the young girl of her demon.

I saw The Exorcist when it first played at Birmingham Rep (who alongside Bill Kenwright are co-producing this London transfer) last year. It was a great night at the theatre, but what struck me then, aside from the starry lead performers, was the fabulous work from Clare Louise Connolly who plays Regan.

The Exorcist play may well be dripping in world class special effects and illusions – but at the heart of this gruesome horror story is quite simply a breathtaking performance from one of the country’s finest young actresses.

As rehearsals were ending, I caught up with Clare to talk about the show.

JB:    Tell me about the build up last year to your being cast as Regan.

Clare:   I had, probably, about four auditions, and I did a lot of work to get the part. The story shows a really good character arc the story has such a cult following, that I wanted to make sure that I gave the part justice in the auditions.

We worked a few scenes during the audition run, including the iconic movie moment where Regan spins her head around. I made sure I told our director Sean Mathias that my neck was extremely flexible!

JB:    “Iconic” is a word that’s over-used today but it’s entirely appropriate in describing the impact that The Exorcist has made on movies and the horror genre in particular over the last 40 years. Did you use William Friedkin’s movie to prepare for the audition process?

Clare:    Good question. Not very much at all. I knew I'd watched the film years and years ago, but I didn't actually watch it again before I auditioned because I wanted to make the character my own.

When I read the scripts, I was really excited because it's written so well that I just wanted to bring my own truth to it, rather than be an imitation of Linda Blair who played Regan on screen.

JB:    Filming the movie famously took its toll on Linda Blair, with Friedkin demanding countess retakes of some of the most harrowing scenes. You, of course, are telling, the same story, but in a very different, live medium where, like all theatre professionals, you have to get it right, first time, every time. Having seen the show last year in Birmingham I can confirm that your performance is magnificent and convincing.

Do you enjoy horror as a genre?

Clare:    I do. I didn't used to but then I watched The Orphanage that I just thought was so beautifully done. I'm not a massive horror fan per se, I don't seek them out so much, but if there is a horror film that I think, "Oh, that looks interesting " then I’ll watch it.

The Ring is when I think horror movies turned and really started to get back in the public eye again. But, in preparation for The Exorcist I have watched more horror.

JB:    The biggest challenge of telling a horror story is to get the audience to suspend our disbelief....

Clare:    Yes, but it also needs truth. It has to make it real and I think that's the success of The Exorcist. It is such a domestic story, and you can really imagine how these events could potentially happen.

There is also a strong focus on mental health in the narrative. Chris struggles with guilt and worries that her daughter feels abandoned. Father Damien(Adam Garcia) also struggles with guilt over abandoning his mother before she died. Uncle Burke (Tristram Wymark) is dealing with addiction, so there's a lot of themes that are relevant to today.

JB:    Some people say that violent horror, when portrayed as entertainment, “sets a bad example”. Do you have a view on that?

Clare:    Yes - I do feel quite a responsibility to a story well and to take the audience on a journey.

One thing The Exorcist does talk about is that where there's evil, there's also good. I think people like to have their dark side challenged and I know that the response of the audiences has been amazing.

JB:    Tell me about the audience responses - without giving too much away of course.

Clare:    Well there are a couple of jump moments of course but it's not really about that. There is a moment where the audience get quite loud, and shocked that we can actually pull a particular effect off on stage - Ben Hart’s illusions are amazing.

JB:    Do you enjoy hearing their screams?

Clare:    Actually, no! I have to really concentrate to not absorb that energy and that’s a big thing for me. As a person I'm quite empathic, so, if I hear somebody screaming, my feelings are that I want to protect them!

JB:    The show has opened on Halloween, which is very much nowadays a season that treats horror with a fair amount of tongue-in-cheek frivolity. But even though The Exorcist may well be "popcorn-theatre", it is not in any way a pantomime, or a show that can allow its cast to interact with the audience.

Clare:    "Popcorn theatre" is a great description. We've actually had women come along to see the show dressed as Regan! So who knows - we might have the beginning of a cult show here.

What I do know though is the genius of John Pielmeier's adaptation that allows a lot of comedy in there too. There is the time for the audience to laugh, and it might be right before they’re meant to feel scared, so it really throws them back and forth. The Exorcist audiences have been the loudest I've ever experienced doing a play, in fact they probably are on a level with pantomime audiences. It’s a real experience for them and so far they all seem to be loving it, lapping it up and coming out afterwards really exuberant, bright eyed and with lots to say.

Another key part of the show’s magic for me is the sound. When I landed the part, the first thing I wanted to find out was who was designing the sound, because, for me personally, it is the sound affects that complete the illusion. When I learned that it was Adam Cork - who I've worked with before on something else that was also very distressing and horrific -  I was like, "Brilliant. We're okay. He's fantastic." And, when you enter the theatre and you've got that haunting chanting sound, it just puts you on edge to begin with!

JB:    The possessed Regan literally looks horrific. How long does it take you in make up to get that face just right?

Clare:    Make up is actually an amazing challenge, because it’s a gradual process throughout the show. I start clear faced, no make up, just as Regan starts off as a normal happy girl, who has a great relationship with her mother. So it’s a gradual build-up.

On the brief moments when I'm not on stage, there's a brilliant lady called Billie Sanger, who is adding make up to me, slowly, and that's how it happens.

JB:    And you are not off-stage for very long at all.

Clare:    I know. Most of my changes are about 35 seconds. I think I might have one that's about a minute and a half. And they're very quick. And I do change my nightie a few times as well. Very quick changes.

JB:    Let’s talk about Ian McKellen and THAT voice. Last year in Birmingham it wasn’t announced that he was voicing the devil and in fact he didn't even get a programme credit. Now, with the London opening, his part in the show is well publicised.

What’s it like to lip synch to Ian McKellen?

Clare:    Fantastic. An absolutely dream.There  are certain people you really want to work with in your career and he’s at the top of that list. Even though his voice is recorded, we did rehearse together so as to make sure that the cadence of what I was saying and rehearsing matched his cadence, rhythm and speed.

I didn't actually know it was to be him voicing the Devil until the read through!  I met him about 10 minutes before we commenced and then started acting with him and it was just brilliant. He's such a legend and yet I immediately felt calm working with him.

What’s great about Ian's voice is that people recognise it. This in turn makes it all the more believable as to why Regan takes him on as a friend. If he’d been voiced as a gruff, mean sounding villain, she wouldn't have given him the time of day. Ian’s Devil however is smooth and he just entices her in.

And of course the rest of the cast are amazing to work with too. It's been such an ensemble piece with everybody throwing in ideas. Sean really likes to take a collaborative approach.

JB:    Clare, thank you finding the time to talk. To you  and to the whole Exorcist company, break a leg with the run.


The Exorcist is booking at the Phoenix Theatre until 10th March 2018
Posted by Jonathan Baz at 10:17