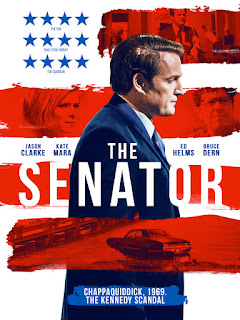 John Curran’s film The Senator is released to DVD and download this week. The fact that in the USA last year it was released under the title Chappaquiddick should tell anyone with a reasonable knowledge of 20th-century American history that the movie’s titular Senator is Edward (Ted) Kennedy.

The youngest of the four Kennedy brothers, America’s dynasty of Democrats, Ted'sthree siblings pre-deceased him. Joseph, the eldest, killed in action during World War Two and John (JFK) and Bobby both brutally assassinated. There might have been every chance that Ted could have followed both John and Bobby on his own path to the White House, until a fateful night on Chappaquiddick Island, Massachusetts in July 1969. There, with Mary Jo Kopechne alongside him in his car, Kennedy's car crashed off a bridge and into a shallow stream below. Although Kennedy managed to free himself from the submerged and upturned vehicle, Kopechne died, her body being recovered from the car the next day.

History has blurred the events of that terrible night into both fact and folklore - What is known is that Kennedy left the scene of the crash and then took 10 hours to report the incident to the police. What has never been confirmed are the circumstances surrounding why Kopechne, a young single woman who had worked on Bobby Kennedy’s Presidential campaign was alongside the (married) Senator in his car, nor whether there was any foul play surrounding her death. Kennedy was tried and found guilty, by his own admission, of “leaving the scene of a crash causing personal injury”, for which he was sentenced to a suspended two months jail term. The greater consequence of Chappaquiddick however was that his prospects of becoming President were effectively shattered.

Researched from the court transcripts and such information as was accessible, Taylor Allen and Andrew Logan have written a tight and convincing screenplay. Jason Clarke plays Kennedy, bringing an uncanny resemblance between the actor and his subject. The nuances of corruption and abuse of power are strong throughout the movie and there is well fleshed out work from Ed Helms and Jim Gaffigan as Edward’s friends and confidantes Joseph Gargan (Kennedy’s first cousin) and Paul Markham. In a punchy, almost throwaway comment from Bob McNamara (Clancy Brown) a heavyweight fixer in the Kennedy campaign, he observes that the furore around Kopechne’s death has created a bigger political storm than 1961’s Bay of Pigs fiasco.

What has also been forgotten by many is that the death of Mary Jo Kopechne was to coincide, almost to the day, with the Apollo 11 moon landing. Curran has his movie play to this, with the scheming and machination of the Kennedy team as they strive to bury the news of the Senator’s crisis amidst the jubilation of Neil Armstrong’s moonwalk proving to be a timelessly recognisable trait of our political class.

Kate Mara is the doomed Kopechne, immaculately capturing a complex role. The movie suggests neither sexual contact between Kopechne and Kennedy, nor that she was murdered. Rather, it leaves all avenues open to question, with Mara’s masterful performance proving critical to the intrigue. A neat cameo from the veteran Bruce Dern as the Kennedy boys’ father Joe Snr, defines the old man, wheelchair bound and with only months to live, as controlling and compelling. With minimal dialogue, Dern defines the dominating and profoundly disappointed paterfamilias.

As an observation, Hollywood’s allegiance to the Democrat cause is well established. While Tinseltown barely hesitated in picking over the political corpse of Richard Nixon (it only took 4 years for Watergate to be committed to celluloid in All The President’s Men) it has taken nigh on 50 years for producers to back Curran and offer up this take on Chappaquiddick. Moving to more recent times and it is nearly 18 years since Bill Clinton left the White House, making it all the more remarkable that there has yet to be a movie about the (unquestionably sensational) Lewinsky scandal and Clinton's subsequent impeachment. Clearly America's tentacles of power and influence continue to reach from sea to shining sea and against that backdrop, The Senator is indeed a brave and well crafted movie.

Available in DVD format and for digital download from the usual sources.
Posted by Jonathan Baz at 18:38