As Bill Buckhurst’s production of Sweet Charity takes the show squarely back to its 1960s origins with Rebecca Trehearn in the lead, the show delivers an exhilarating if somewhat brutal comment on humanity that proves disarmingly timeless.

Trehearn’s Charity is as kooky as the role demands – and yet driving her character is the same honest energy that Julia Roberts’ Anna showed in the movie Notting Hill. Charity is just a girl asking a boy to love her, and it is a mark of the genius of the recently departed Neil Simon, that his book has us believe in its commonplace heroine’s remarkable journey.

The show revolves around Charity and her fellow taxi-dancers at the Fandango Ballroom, earning a buck as they are paid to dance with sleazy punters. Amidst the Fandango’s glitter, there’s little real sparkle to this life but again, it is Simon’s scalpel-like incisiveness that teases out the pearls of humanity that exist in this New York dive. Buckhurst, with choreographer Alistair David, offers up a scorching interpretation of the old yarn. The show’s most famous number, Big Spender has long been associated with Shirley Bassey’s razzmatazz, a song that is an adulation of a man with power and money (sounds familiar, no?). Here however, the brashness is reduced to subtly jarring cascades of both movement and harmonics, underlining the truth that there really is no glamour whatsoever amidst the men who visit the Fandango Ballroom. Buckhurst’s Big Spender is more chilling than thrilling – an inspired move.

Driving the show is an immensely talented cast and crew. Trehearn brings an exhilarating confidence to Charity, inhibiting the role with song and dance that is perfectly performed. At her finest with the big solos of If My Friends Could See Me Now and, a Dolly Levi-esque I’m A Brass Band, she is a whirl of relentless energy and talent. 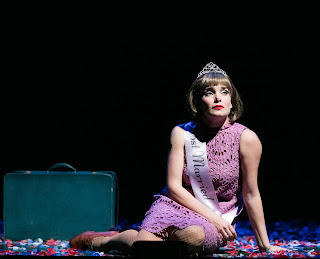 Charity's two love interests come from Jeremy Secomb’s wonderfully hammed-up Italian movie star Vittorio Vidal and the far more complex Oscar Lindquist (Marc Elliott). While Vidal is a two dimensional screen idol, it says much for Secomb that he still brings moments of rich empathy to the role along with vocal majesty to his one big number Too Many Tomorrows. Elliott has a much tougher nut to crack with Oscar’s inadequate everyman. If one thinks of The Producers’ Leo Bloom, or (from many years ago) Woody Allen’s countless neuroses-fuelled New Yorkers, Elliott delivers a sharply observed interpretation of a man who is ultimately a hopeless, cowardly failure.

And the supporting roles are a treat too – Amy Ellen Richardson and Carly Mercedes Dyer (taxi-dancers) offer up a gorgeous two-part harmony with Baby, Dream Your Dream, also impressively leading the Fandango girls in Big Spender, as Leah West puts in a neat turn as Vidal's manipulative lover, Ursula.

The show has its brief moments of hilarity. Shaq Taylor kicking off the second half with The Rhythm Of Life is just pure theatrical joy – showcased brilliantly by takis’ arches – while the act closes with brilliant work (again) from Carl Sanderson’s Herman singing I Love To Sing At Weddings. Across the show, Caroline Humphris' deliciously brass-heavy band perched cleverly atop both sides of the stage, are magnificent.

It has been some years since the Nottingham Playhouse staged a full blown Broadway show – Sweet Charity places the venue firmly back on the map of the nation’s musical theatre hotspots.

Runs until 22nd September
Posted by Jonathan Baz at 18:29