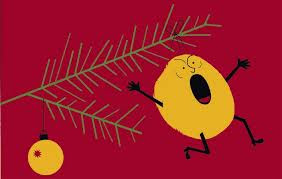 Lemony Snicket sees his work brought to the British stage for the first time with this seasonal tale of cultural diversity.

Latkes are traditional potato pancakes served during the Jewish winter celebrations of Chanukah, but the one that Snicket focuses on, upon realising that his ultimate purpose in life is to be plunged into hot oil and fried, not unreasonably chooses to escape the frying pan. As he runs through his snow covered village, he encounters gentile and Christian seasonal traditions that make for some well observed contrasts.

Tall Stories who were commissioned to create the work, have succeeded in presenting a one act piece that deploys the considerable talents of their five person cast in stimulating and exercising the imaginations of their young audience. Their depiction of twinkling Christmas lights on a nearby house, using simply different coloured bobble hats and the actors’ nodding head movements is brilliant, whilst their portrayal of the heroic battle that underlies the story of Chanukah, using different vegetables to tell the saga, is inspired. The audience at the press performance comprised very young school children who laughed and clapped through most of the show.

The story however carries some flaws. The ultimate change of heart of the latke, to willingly accept being deep-fried (and hence die) is not explained and similarly in the battle, from amongst a wealth of available fruit and veg, the writers elect to portray the Jews using potatoes, vegetables that within this show’s structure at least, have a sole destiny that is to be grated, fried and ultimately consumed. Whilst children may not make such a dark connection, this is a clumsy mechanism that inappropriately addresses a classic piece of history. The Chanukah dreydl, or spinning top, is introduced but not satisfactorily explained, nor is the closing Hebrew song of Moaz Tsur, which whilst being familiar to a Jewish audience, will leave other faiths bewildered. Perhaps the producers could provide a more detailed programme, rather than the current meagre sheet of A4 paper.

Amongst the cast , Michael Lambourne is a delightful lead, whose movement and facial expression had the kids in fits of giggles. Stuart Barter’s guitar, with other actors on clarinet provides an authentic klezmer background, whilst Heather Saunders as a sultry Miss Candy Cane is sweetly seductive.

The show is a fun fifty minutes that will broaden your mind and leave you craving a hot fresh fragrant latke.