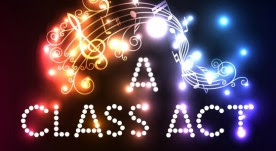 A Class Act at the Landor Theatre is a biography of the lyricist of A Chorus Line, Ed Kleban. Written by Linda Kline and Lonny Price, it charts the life of this talented creative who died tragically young in 1987 of smoking related cancer, via a parcel of songs that he bequeathed to Kline and around which the show’s book has been fashioned.

The show depicts Kleban’s life as almost manic. A gifted composer as well as writer, the story’s history commences in 1958 with his inpatient stay in a mental hospital, in which the fragility of his mental balance is clearly signalled. A Chorus Line was to be his only Broadway hit and this show painfully depicts the torture his soul endured at the lack of recognition afforded his musical compositions. Kleban’s mental anguish combined with his early demise make for harrowing watching, yet in Robert McWhir’s skilled hands, this little-known piece is as uplifting as it is tragic.

That A Class Act is such a glorious evening spent in the theatre, is largely due to the efforts of one man, John Barr. His Kleban is on stage almost throughout and he portrays the flawed but gifted composer with an energy that at times suggests a neuroses fuelled younger Woody Allen (the specs clinch it), albeit divinely voiced. Kleban opens the show with an inspirational number, reprised through both acts, Light On My Feet and his closing song, Self Portrait, that wraps up the chapters of his life is as moving and upsetting as a musical can be.

This is a show in which it is invidious to name individual performers. All of the seven supporting cast are outstanding. Memorable though, Barry Fantoni’s Lehman Engel, a teacher of libretto who Kleban studied under going on to teach alongside, was witty and frank. Sarah Borges’ Sophie, Kleman’s first and deepest love is a performance of beautifully calculated understatement, Erin Cornell’s seductive blonde bombshell Mona is as sensitively overstated at the opposite end of the spectrum, whilst Jane Quinn’s Lucy, in love with Kleban, plays both passion and poignancy in perfect proportion.

The company do not put a foot wrong and under Robbie O Reilly’s cleverly crafted choreography, the Landor’s space is well used and as cleverly lit by Richard Lambert. Only on until April 13, this production is a rare “must see”. It is an example of London’s and the Landor’s talents at their very best.