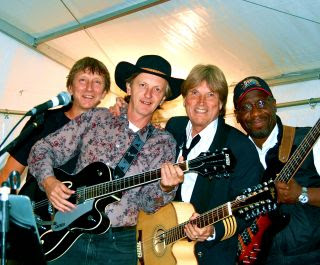 Packing the crowds in The Mick Flinn Band ‘s My Generation Club Night is proving something of a stir in rural Rickmansworth. Once a month Flinn and his band, guitarist Pete Lennon, Ricky Simpson on bass and drummer/singer Steve Rolfe, take over the otherwise quiet Long Island Hotel opposite the tube station, and roll out a set of immaculately performed covers that encompass the greats of the 60s through to the 90’s. Whilst the audience may be predominantly silver haired, the music pulses with a strong beat and as a reasonably priced, reasonable meal is eaten, the band maintain an excellent ambience, with couples frequently taking to the floor for an impromptu twirl.

Flinn is a class act of a showman. His band The Mixtures reached No1 in 1971 with The Pushbike Song and he knows how to work a room, especially out in the shires.

The My Generation Club Night follows a formula that is surprisingly effective. The band play a strong opening set, there is then a pop-quiz, followed by a guest band or artist, before Flinn’s boys play until an 11pm close. If the thought of a pop quiz makes you groan, think again – when the questions are such as: Which famous hellraiser first recorded the Jimmy Webb song, Macarthur Park? ( answer at the foot of this review), it is clear that the questions, aimed at the 50+ audience, don’t pull any punches.

The Long Island venue has surely seen better days, but much as in a movie where a band’s arrival transforms a venue, so it is with The Mick Flinn Band, and the crowd’s mood throughout the evening, whilst not electric, was certainly incredibly enthusiastic. On the night of this review the set included songs from The Beatles, Rod Stewart along with The Eagles and several rock and roll numbers, whilst the guest act were the talented Broken Boat performing a short line up of R&B.

For an evening of quality music, excellent value and a great craic The Mick Flinn Band are well worth catching.

Every third Tuesday at Long Island Hotel, Rickmansworth
Also at The Bar At The George, Chalfont St Peter