Alice Diamond And The Forty Thieves 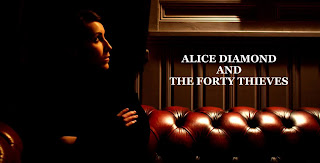 The phrase "site specific" is frequently banded about, but rarely has it been so appropriate as to describe this play. Performed upstairs at The Bell pub in Middlesex St, E1 (aka the capital's famous Petticoat Lane) on the fringes of the East End, Alice Diamond And The Forty Thieves is itself set above just such a fictional gangland boozer some 60 years previously and probably located just a mile or two up the Whitechapel Road.

Alice Diamond (so named because of a predilection for using her jewellery bedecked fingers as a vicious weapon) is based upon Alice Hughes, real life boss of a 1950’s girl-gang of thieves and shoplifters. A romantic interpretation could see her as a 20th century Fagin. The reality of London’s gangs was of course far more brutal than Bart’s Oliver!, more Bill Sykes than Artful Dodger. Madelaine Beevers writes with such a perceptive feel of colloquial period cockney that her play remains gritty and authentic, without ever becoming caricatured.

The story unfolds over the course of a single remarkable day. Maud has just returned to the gang following a six month jail term whilst blonde bombshell Dolly, a blackmailer, has only recently been shot dead. The script follows Maud’s re-entry into the bosom of the fold, whilst at the same time watching how the gang go about finding out who ordered the shooting. And all played out under the quiet controlling leadership of Alice.

Beevers herself plays the title role, in a well-constructed part that displays both command and menace through a selfless subtle understatement. Only rarely since Anita Dobson's Angie Watts of Albert Square  has female East End grit been so hypnotically portrayed. Emma Lillie Lees’ Maggie, a loyal gang member who has seen it all, is another treat of a performance and Katie Pearl’s authentically beehived moll is yet a further clever nod to the mode of the times. Providing a well observed and modestly comic turn, Johnny Doran’s Irish son of the pub landlord raises a few chuckles through the evening, though Beevers use of wry cockney banter - shoplifting is referred to as the "five finger discount"- provides some moments of wonderful irony.

A pre-interval surprise (no spoilers in this review) leads to a complicated second half in which deceit and double crossing are exposed and unravelled. The story occasionally stretches the limits of credibility, although the play’s suggestions of an incestual relationship between Alice and her brother hints at the complex sexualities of some of the notorious East End gangland bosses of the 50s and 60s.

Boxing posters adorn the bar-room walls, and with character names that include the dated Ada and Bertha, the setting of time and period is effectively accomplished in Emma Williamson’s clever direction. This play is an invigorating and stimulating example of modern writing and is a credit to the young talent behind Soot – Skin Of Our Teeth Theatre. Turn up in time to buy yourself a beer or that large scotch and settle down to enjoy a thrilling and roller-coaster drama.