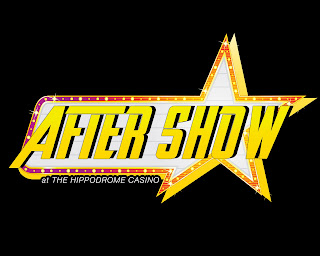 Once a month, the London Hippodrome’s divinely decadent Matcham Room succumbs to a midnight hour (or two) of cabaret’d magical mania, as the cast of two West End shows battle it out in a quiz/contest of wit and talent in After Show.

OK, so its not quite midnight (the show commences at 11) but the evening reflects one of the most skilful combinations of spontaneous improvised hilarity along with the immaculately rehearsed professionalism of some of the most sickneningly talented performers to be found on stage today. The July show featured Merrily We Roll Along vs Spamalot with Damian Humbley, Robbie Scotcher and Zizi Strallen representing Merrily, whilst Jon Robyns, James Nelson and Michael Burgen flew the Spamalot flag.

The smut was frequent and the gags were fast and furious (I lost count of the number of times the lyric “I’m Zizi Like Sunday Morning” was sung by the hosts, but it didn’t really matter) and the challenges that are posed to the teams are best described by the technical term “ridiculous”. Amongst rounds that were tributes to old TV game show favourites such as Bullseye and The Generation Game, there was also a Countdown round requiring words to be formed from the letters SUQMADEEK and ASSBURGER. Classy huh? Well er, embarrassingly er, yes. This reviewer could be found, from time to time, moist eyed at the hilarity of it all.

Each month features unique games inspired by the competing teams with the two specialised games of this particular evening being "Merrily We Fling A Thong", in which a marshmallow had to be knocked off an opponents head using only the flinging of a thong and Cramalot, in which opponents' mouths were increasingly crammed with marshmallows. As the stuffing increased, after each additional candy was inserted (or forced in) the stuffee had to say the word Cramalot. Its unashamedly schoolboy stuff, but trust me, it works.

And amidst all this rather stupid mayhem, there are some quasi-serious moments of genius, when the contestants stand at the mic and sing, beautifully accompanied by the house band of Steve Holness, Elliot Henshaw and Olly Buxton. And as might be expected, the singing is simply sensational. For the most part casually clad, and with a simple intimacy that belies the outstanding standard of their performances, these skilled professionals rattle off some of their personal favourites in a manner and style that The X Factor can only dream of replicating. Memorable from this visit (though all the performers shone) were Michael Burgen’s "Debukelele" with John Robyns modestly accompanying on guitar and Robbie Scotcher’s Dancing In The Moonlight. Talented performers, singing beautiful songs, wonderfully.

Regular hosts of the night are Simon Lipkin, Jamie Muscato & Owen Visser who, as well as being gifted musical theatre professionals, also bring a polished and semi-rehearsed wit and irreverence to the night that, amidst much heckling, is great for its immediacy as well as its barbedness. They take no prisoners, but its all done amidst affectionate respect.

If you are an MT professional, then a visit to After Show is a must. If you are simply a fan of the genre, with a love for theatre, be it West End or fringe, then go. You may end up sitting next to the star of the show you’ve just seen on stage, you may end up spattered with shaving foam, or you may just end up amused and entertained. Bring your cab fare or a night bus timetable to get you home, it finishes after 1, but above all, just go. After Show is a supremely professional gig that blends meticulously rehearsed excellence with anarchic hilarity. Catch it when you can!

(Oh, and Spamalot won on the night!)

To find out more about After Show dates visit www.AfterShow.biz
Posted by Jonathan Baz at 17:22