Mack-beth : A Profile of Norman Bowman 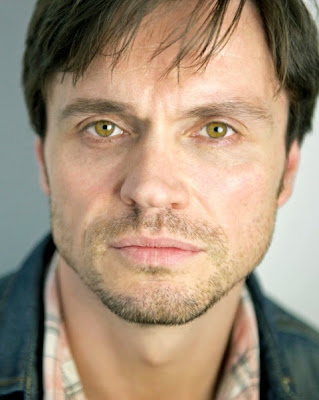 Bearded and relaxed in shorts and t-shirt, it’s a pleasure to grab an afternoon with Norman Bowman as he takes a breather from the demands of Kenneth Branagh’s acclaimed production of Macbeth at the Manchester International Festival. From a career that started out in musical theatre and has been most frequently filled by work in that genre, no-one was more surprised than Bowman himself to have been cast in this Shakespearean masterpiece, but as our conversation unfolds it is clear that all that this actor has achieved to date has been nothing less than hard won and above all, richly deserved.

Bowman’s biography is a tribute to his talents. He is wise to what makes a commercial West End production work, acknowledging that a “star name” is often needed to sell tickets and in a charmingly self-deprecating comment he acknowledges that today he may well not be that “star” person. Star billing or not, the body of work that this talented performer has achieved speaks of his abilities. From being cast as Marius in Les Miserables early on in his career, he has gone on to play Carousel’s Billy Bigelow in Chichester, Danny in a Grease national tour, Tony in West Side Story, and a two year stretch as Sam Carmichael in Mamma Mia. Whilst these parts have been his commercial leads, with many other supporting roles along the way, off West End his Mack in Thom Southerland’s 2012 production of Mack & Mabel at the Southwark Playhouse, was one of London’s outstanding male musical performances of the year.

When Bowman reflects upon his journey to Macbeth, he does not hesitate in acknowledging the creative genius of Rob Ashford who, with Branagh, has co-directed the Scottish Play and who has creatively worked with the actor on three previous occasions. Bowman speaks warmly of being choreographed by Ashford in Michael Grandage’s 2005 Guys and Dolls, a show in which he played gambling gangster Harry the Horse, chuckling to learn in our conversation that the National Theatre’s 1982 version of that show opened with fellow gritty Scots countryman Bill Paterson, in the same role.

Ashford was to go on and cast Bowman as Tom Watson, the outspokenly racist publisher from the Deep South in Parade by Jason Robert Brown. Parade had had a difficult opening on Broadway and it was not until Ashford’s take on the work at London’s Donmar, that the show achieved the acclaim it deserved, an association with which Bowman is evidently proud. His next engagement under Ashford was to be directed by him in Finding Neverland at Leicester’s Curve. The production was controversial being movie mogul Harvey Weinstein’s first venture into staging an original piece of theatre and Bowman is nothing if not diplomatic in referring to the show’s journey. Notwithstanding the show’s challenges, Finding Neverland had provided a further opportunity for Bowman to work with the American, so when the opportunity for Macbeth arose and whilst there is no question that Bowman earned his place on merit, the established mutual respect between him and Ashford combined with his glorious Arbroath accent clearly stood him in good stead. Bowman is in fact one of only a handful of authentic Scots cast in this most Caledonian of texts.

Bowman speaks as a man wise about his world and his profession. Even though he looks (enviably) damn good for his 43 years, he is all too aware that he is frequently auditioning for roles against fellow professionals some years his junior. His philosophy though is admirable, always respectful of competitor actors, yet focussing his energy on his own performance, rather than worrying over the potential strengths and weaknesses of others. He refers to the adage that once you mentally put yourself in a “race for a part”, the other actor is already in front of you and how he avoids that thought process.  It’s an attitude that speaks of immense personal strength, a pre-requisite in the glamorous but nonetheless harsh show-business world. He also speaks with a wry and realistic acknowledgment of the power of social media, the new lingua franca amongst performers and those who follow them, as an important component of an actor’s profile. He is savvy enough to recognise the increasing importance of media channels such as Twitter that can allow an audience to immediately express praise (or displeasure) for production or performer as they exit a theatre and like many around him, he conducts himself with measured professionalism in the online community.

Bowman is that rare performer who is not only skilled enough to have amassed a respectable body of work to date, but is also open-minded enough to welcome development and improvement from acting legends. He speaks warmly of his time, again under Michael Grandage, in the director’s Twelfth Night that formed part of the Donmar at the Wyndhams season. Working with and occasionally opposite Sir Derek Jacobi was an experience that he acknowledges to have been rare and privileged and Bowman speaks with warmth and admiration of how he found Jacobi to be a source of inspiration. That some four years on he now finds himself selected to perform in a Branagh-led Shakespearean troupe is a further mark of the Scotsman’s talent.  As one might expect, he is at all times refreshingly respectful, but never fawning, to these giants of the English stage.

A father of two twins, Bowman speaks lovingly of his kids and it is clear that notwithstanding his recent separation from their mother and his long term partner, they remain vitally important to him and he remains focussed on being a significant part of their developing lives, living close by to them in London

Our conversation ends to allow Bowman time to return backstage, don his heavy garb as nobleman Ross and perform the daily pre-curtain up rehearsal that health & safety regulations demand of all fight scenes. For this production of Macbeth such compliance is an exhausting obligation as the stage combat of Ashford and Branagh’s vision is amongst the most ambitious ever presented in live Shakespeare. The physical effort that the actors put into their meticulously choreographed battle-work and swordplay is jaw dropping, as sparks literally fly from the clashes of heavy steel.

I bid farewell to this accomplished musical theatre performer and Shakespearean stalwart to boot and reflect that to describe Norman Bowman as “comfortable in his own skin” would actually be to understate. He is good at his job and, with all appropriate modesty, he knows that he is good at it too. Above all, the man is a committed actor who loves his work and it shows.

My review of Macbeth can be found here

My review of Mack & Mabel can be found here
Posted by Jonathan Baz at 13:24