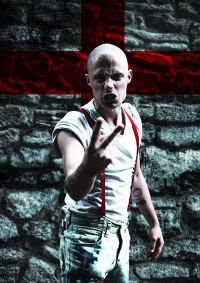 On the basis that a good Titus Andronicus should never be for the faint-hearted, then this Hiraeth production should rate as outstanding.Well it's good, for sure, but it cuts too many corners and takes a few too many liberties to be a truly memorable Titus.

Zoe Ford sets her tale in 1980's London. The Roman Andronici are fascist skinheads. Tattoos, lager and skinhead haircuts depict hatred. Their Goth enemy, in this show, are Irish immigrants. There's sufficient potential for hatred and retribution between these two communities to support the revenge themes that run through the veins of the play and interestingly Aaron the Moor, a compelling performance from Stanley J Browne, is given an added degree of depth as being a black man amongst such a vile and racist people. In a text that has been been cut extensively by Ford, she has wisely retained Aaron's closing speech of venomous hatred.

It's a show that's curiously cast. As Titus, David Vaughn Knight does an excellent take on Bob Hoskins' Harold Shand from the movie The Long Good Friday. No one does revenge better than a pissed off Cockney, but Titus is more than vengeful. Like the Goth Queen Tamora, he is also a wronged parent, grieving for the woes inflicted on his children and whilst Rosalind Blessed's lusty, busty, flame haired Tamora is all sex and wicked deviousness, she also portrays a distraught parent with far more credible grief than Knight. Maya Thomas' Lavinia is perhaps a bit too much of a thug prior to her rape and she does not come across as sufficiently chaste to merit the pursuit of emperor Saturninus, a critical component of the play's opening movements. Notwithstanding, following her assault, she does elicit our pity portraying her muteness with heart-rending pathos.

The cast and creative team have clearly had some fun here and for a typically low-budget Titus, the stage blood flows. Chiron and Demetrius have their throats cut with a circular saw, whilst Titus lops off his own hand with a heavy garden spade. It's deliciously brutal and not for the squeamish, though one complaint: when Lavinia tries to speak following the ripping out of her tongue, the torrent of stage blood that pours from her mouth is expected. Her bleeding stumps however deserve more of a special effect than a pair of red socks, which look suspiciously like a cheap cop-out by the designer.

Ford has played it fast and loose with the prose and that's a disappointment. Whilst liberal additions of the "f" and "c" words might be presumed to make a production more accessible to an audience unfamiliar with Shakespeare's writing, they actually detract from the beauty of the Bard's verse. That too many of the lines are inaudible is also a detraction from the impact of the text.

If nothing else, the play is certainly an uncomfortably humorous take on slaughter, which at two hours length including interval, will not leave you bored. That Ford opens her work with the 80's classic Come On Eileen blaring and for a finale sends her cast on to take their bows to Madness' Our House, suggests that for all her worthy intentions she does not wish her production to be taken too seriously.

Runs until 26th October
Posted by Jonathan Baz at 00:36